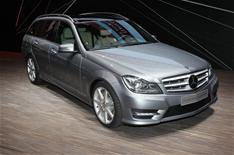 Mercedes unveiled the much-changed C-Class in private at Detroit earlier this year, but has waited until here at Geneva to give the public its first look at the car.

Thats allowed the first C-Class coupe (see separate story) to be completed in time to appear alongside the revised saloon and estate.

All engines are more fuel-efficient and better for CO2 emissions, led by the C220 CDI, which now emits just 117g/km.

Theres much more to the revised C-Class than lower tax ratings, emphasised by there being 2000 new components scattered around the range. Ten new driver assistance systems become available, the interior has had a significant quality upgrade and the exterior has been refreshed in a subtle-enough way to avoid damaging the secondhand values of existing cars. Theres also a new telematics system thats easier to use.

A V6 diesel will join the range in summer and a revised AMG model still with the old 6.3-litre V8 engine, but with 10% better fuel economy will follow soon afterwards.

Mercedes has put prices are up by an average 1.5% to reflect the latest changes, but despite that the C-Class is now a better overall ownership proposition.