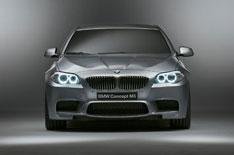 A concept car version of the next BMW M5 will make its world debut at the Shanghai motor show later this month.

Although final performance details are yet to be announced, the 'high-revving' turbocharged V8 is expected to rise above the previous version's 500bhp, but offer improved economy and lower emissions at the same time.

The engine will be mated to seven-speed dual-clutch automatic transmission as standard and will also have an engine stop start system. Expect the M5 to blast from 0-62mph in around 4.5 seconds and continue on to a limited top speed of 155mph.

Wider wheelarches, larger air intakes, diffusers, aprons and a small rear spoiler set the car apart from the rest of the range.

Although near-finished concept versions of the 6 Series Coupe have been shown before along with photographs of the final version the Shanghai show will also be the first chance to see the car in the metal.