* New noses for small Skodas * Engine range revamped * Cars on sale in May... 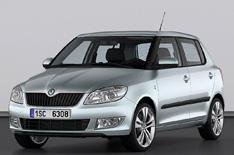 Skoda has updated its Fabia supermini and Roomster mini-MPV.

Both cars have a redesigned front grille and headlamps. The reworked front ends hide a new line up of fuel-efficient engines.

Roomster engines
The Roomster has a similar range of engines, although it misses out on the 1.2 60bhp petrol.

Fuel economy and emissions details have yet to be revealed, but Skoda says both diesels emit less than 110g/km of carbon dioxide.

Full details are likely to be released when the new-look cars are unveiled at the Geneva motor show next week, including a hot Fabia vRS.

The revamped cars go on sale at the end of May. Prices will be announced shortly.