The best-handling car in the class, the Focus is representing diesel power in our company car battle.

The Corolla has replaced the Auris as Toyota’s family car. Can it prove hybrid is the way to go?

Even in its twilight year, the Golf remains a fine car. Here, it’s flying the flag for small petrol engines.

Do you remember those magic eye pictures? The ones that look like psychedelic art, but if you make your eyes go all squiffy, a significant image reveals itself? Well, glance fleetingly at these three cars and they look like direct rivals. Look more closely, though, and this test also has a deeper significance. What makes a better company car in 2019: a petrol, a diesel or a hybrid?

Let’s start by introducing the petrol car. It’s the Volkswagen Golf, which will probably be familiar to you. This iteration has been around since 2012 and will be replaced later this year, but it’s no has-been. The turbocharged three-cylinder 1.0-litre petrol model we’ve chosen is one of the most efficient cars of its kind, while recently introduced Match trim is designed to appeal to the business car buyer. The rest of the package isn’t too shabby, either, and that’s why this Golf has always ranked at the sharp end of the family car class.

Even more ubiquitous is the Ford Focus. Here, representing the diesel angle, is a car that was completely revamped only last year, when it romped straight to number one in the class in terms of handling prowess. We’ve chosen the sportier ST-Line model, which is one of the biggest sellers and, as with all current Focus variants, offers greater practicality and better on-board technology than its predecessor. At this point, let’s also address the elephant in the room: the Focus’s 1.5-litre diesel engine meets Euro 6 regulations, so even Mayor Khan will welcome it onto the capital’s streets without asking you to pay a penny in Ultra Low Emission Zone charges. So, it’s certainly no old smoker, and we’d urge you to keep an open mind.

While diesel has been often unfairly getting its knuckles rapped, the world has gone quite gooey for hybrids. This last corner of our test triangle is covered off by the brand new Toyota Corolla, which has replaced the Auris. It isn’t a plug-in hybrid, so it can’t complete your daily commute on electricity alone, but there’s enough juice to keep its engine quiet some of the time and boost it at others. That’s why, despite it having by far the biggest engine here (a naturally aspirated 1.8-litre petrol), its official CO2 emissions are the lowest. We’re testing it in Icon Tech trim, which is expected to prove particularly popular with the fleet fraternity. You couldn’t find a more disparate trio in terms of the way their engines perform. The Corolla accelerates in the most leisurely manner, while the Golf and Focus are more closely matched. The latter has the edge, though, and it’s the punchiest when you put your foot down from 1500rpm, with the diesel engine’s prodigious torque enabling effortless progress.

That said, the Focus has a narrower operating window than the Golf, labouring more below 1500rpm and running out of puff by about 4500rpm. The Golf pulls pretty well from just above idle and revs much more enthusiastically up to its redline of 6500rpm.

The Corolla is the only car here with an automatic gearbox as standard (Ford and Volkswagen charge you extra for the privilege). It’s a continuously variable transmission (CVT), which works the engine very differently from its manual rivals – and conventional automatics, for that matter. Instead of gaining speed by ticking up ratios one after an other, it spins the engine at the optimum speed for the acceleration you’re requesting.

It’s a lot better than some of the other CVTs around, but with the revs always flaring as you climb hills or accelerate on motorways, it can still be quite noisy at times. At least the engine is relatively smooth, and with a gentle tickle of the accelerator at town speeds, you can get the Corolla to run for sustained periods on battery power alone. In that state, it’s by far the most muted car here, and when the engine does eventually kick in, you barely feel a thing. If only the Golf’s stop-start system were as good. In traffic, the judder as its engine fires up is the most noticeable. It’s also quite vocal when revved, but at least its thrum is pleasingly excitable, rather than inexorable.

That’s not true of the Focus’s engine. It’s not bad for something that drinks from black pumps, but it’s undoubtedly the grumbliest of the three and only quietens down properly at a sustained 70mph.

At this point, you’ll also appreciate its impressively low wind and road noise, which even the Golf can’t quite match. The Corolla generates the most of both, and they enter your consciousness at far lower speeds.

While we’re on the subject of refinement, you can’t help but be impressed by the Focus’s slick gearbox, with its deliciously satisfying gait. The Golf’s is hardly agricultural, but it’s still limper and notchier.

Both the Focus and Golf have progressive brakes that make them easy to stop smoothly, and while the Corolla’s regenerative brakes are the least intuitive, they’re still impressively easy to judge for those of a hybrid. 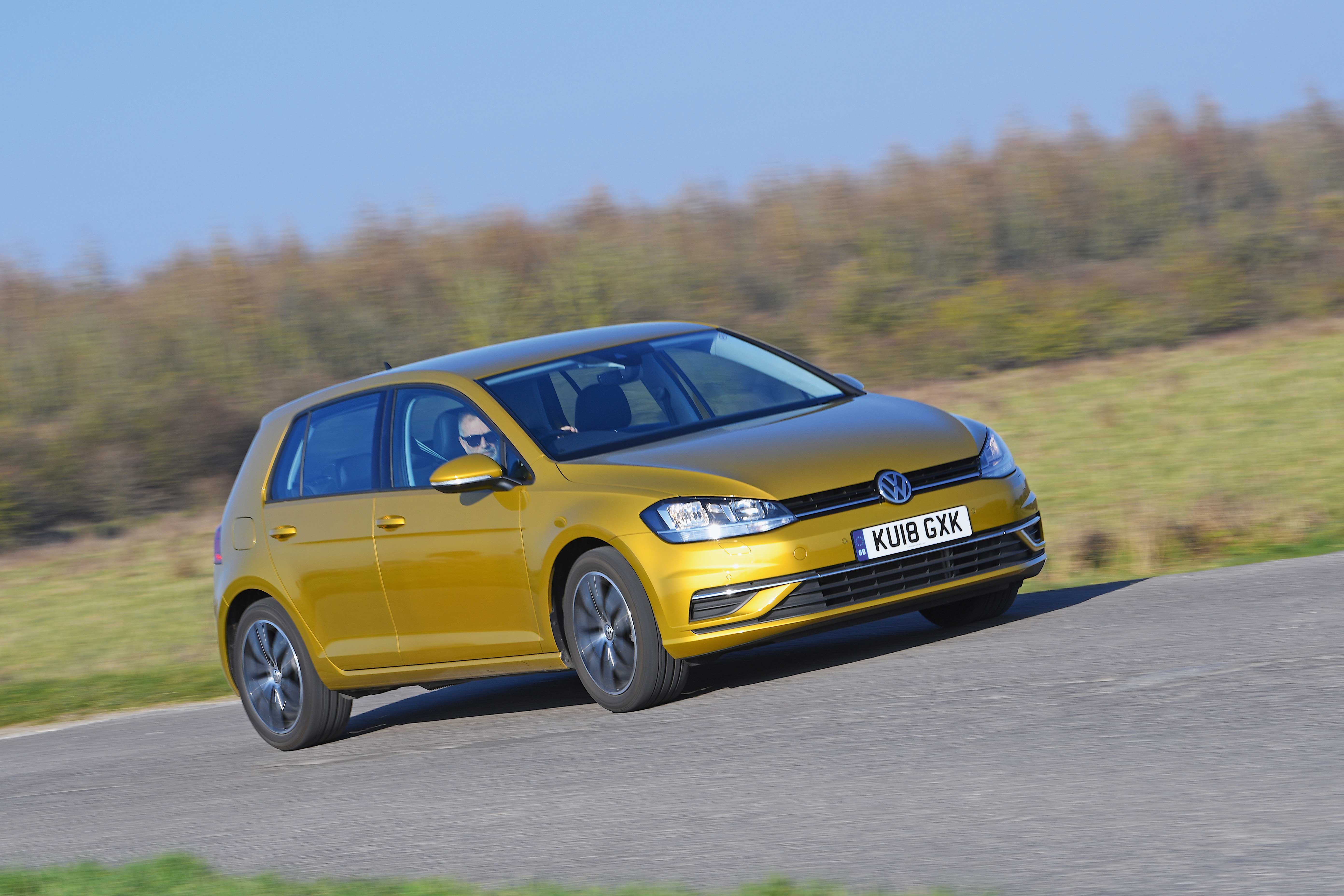 The Corolla and Golf are better at absorbing bumps in the road than the Focus; indeed, they’re two of the comfiest family hatchbacks around. The Golf is a little more supple over speed bumps, but the Corolla is slightly calmer at higher speeds and rounds off sharp potholes better. In this respect, the firmer sports suspension you get with ST-Line trim disadvantages the Focus. It’s far from spiteful (you won’t be reaching for the Nurofen after an hour), but it’s the hardest over potholes and the ride is the most fidgety on motorways.

However, if you’re a keen driver, that’s more than made up for by how sweetly the Focus handles. Its light, quick steering takes a little getting used to, but once you have, it’s a pleasure to swoop from apex to apex, beguiled by just how composed the car is. It has the tightest body control and is the most balanced and playful through turns.

The Golf operates along similar lines, but it’s just not quite as polished. It’s initially easier to find the groove with its more relaxed and progressive steering, but you miss out on the Focus’s added steering delicacy, which tells you more about the surface beneath. At the same time, the Golf leans more through bends and doesn’t find as much all-round grip.

The Corolla is short on grip at the front compared with its rivals, so it will wash out wide the soonest through corners. Its steering is perfectly accurate, though, and it tracks assuredly on motorways (as they all do). It’s just designed primarily to feel easy to drive, rather than be exciting.