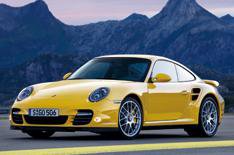 Trust us, this is the new Porsche 911 Turbo. Okay, so except for a row of LED daytime running lights where the foglights used to be and some fatter exhaust pipes it looks pretty much identical to the outgoing model. Dont be fooled, though, because with so many changes under the skin the two cars are like night and day.

For a start, the 3.8-litre engine is all new: its lighter, has direct fuel injection for better efficiency and reworked turbochargers for more power.

Just for the record and if you can afford the 100k pricetag then you probably wont be too bothered fuel consumption has increased to 24.4mpg and CO2 emissions have fallen.

Perhaps the biggest change, however, is how the engine delivers its power. With next to no turbo lag, it sings to the redline so rapidly and with so little vibration that its all too easy to bash into the 7000rpm rev limiter before you have the chance to grab the next gear.

Thankfully, if you specify the £2552 PDK semi-automatic gearbox, you can pay another £271 for steering wheel-mounted paddles instead of the counter-intuitive shift buttons.

Handling has been ratcheted up another notch, too. Theres immense grip from the four-wheel-drive system, and with so much information flooding through the steering and the electronically controlled suspension, youd have to be driving like youre being chased by the mob to come unstuck.

The ride is also remarkably civilised so much so, it beggars belief that a car that handles this well can also be so comfortable.

Now who was it that said beauty is only skin deep?