Porsche Macan will be sportiest in class

* BMW X3 rival aims to be sportiest in class * Prioritises handling and performance * Will eventually offer a plug-in hybrid version... 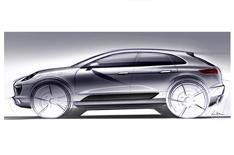 The forthcoming Porsche Macan SUV will be the sportiest car in its class, according to the company's research and development boss, Wolfgang Hatz.

'There's been no compromise, it has to be the sportiest car in its segment,' he told What Car? 'It's the best for precision, handling agility and performance. It's a real Porsche.'

The Macan will be shown for the first time at the end of the year and will go on sale in 2014. It shares some of its architecture with the Audi Q5 and will also share six-cylinder petrol and diesel engines with other members of the VW Group.

However, Hatz also revealed that it will eventually get a plug-in hybrid system, similar to the one that's just been launched in the Panamera E-Hybrid but not before it's also included in the Cayenne line-up.