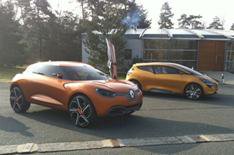 Whatcar.com's Peter Lawton has been driving Renault's future, and you can see how he got on at the test session near Paris.

He got behind the wheel of two concept cars that Renault unveiled at the Geneva motor show cars that mark out the direction it wants to take with its future models and design.

The Captur
The Captur is a small Juke-style crossover that continues Renault's new design strategy with its 'flowing and athletic body' designed to mimic a sprinter on the starting blocks, according to its designer.

The R-Space
Renault's R-Space doesn't just hint at how a future production MPV could look, but also showcases the company's future engine and drivetrain plans. The R-Space is powered by the Renault Energy TCe concept, a 108bhp turbocharged three-cylinder 900cc petrol engine, linked to a fuel-efficient Dual Clutch transmission.

The Renault R-Space revealed
Here's what we thought of Renault's R-Space concept car.