* Motorsport-influenced version of Clio * Gets Renaultsport styling * but not the performance... 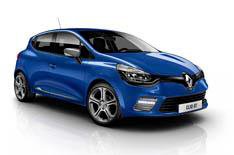 This is the Renault Clio GT-Line, a motorsport-influenced version of the supermini that tries to offer more dramatic looks and handling for those on a budget.

Performance will be some way short of the full-blown Renaultsport Clio's, but it should offer a boost over the regular models'. The GT-Line is powered by a 1.2-litre turbocharged four-cylinder petrol engine producing 118bhp. That's mated to a six-speed dual-clutch automatic gearbox that can also be controlled by steering wheel-mounted paddles.

The GT-Line gets chassis alterations similar to those employed on the more hardcore model.

Renault has yet to confirm acceleration figures, although it has revealed that the car will feature a dashboard button called 'Renaultsport Drive' that will allow the driver to select different levels of steering assistance, gearbox shift speed and throttle response. The Renaultsport Monitor 2.0, which offers on-screen telemetry and lap timing, will be available as an option.

The order books for the Clio GT-Line open in April; the first cars should be delivered to customers in July. No prices have been announced, but we'd expect the GT-Line to cost from around 17,000.