Does the new Toyota Yaris Hybrid have what it takes to beat its diesel opposition? We pitch it against two accomplished rivals to find out... 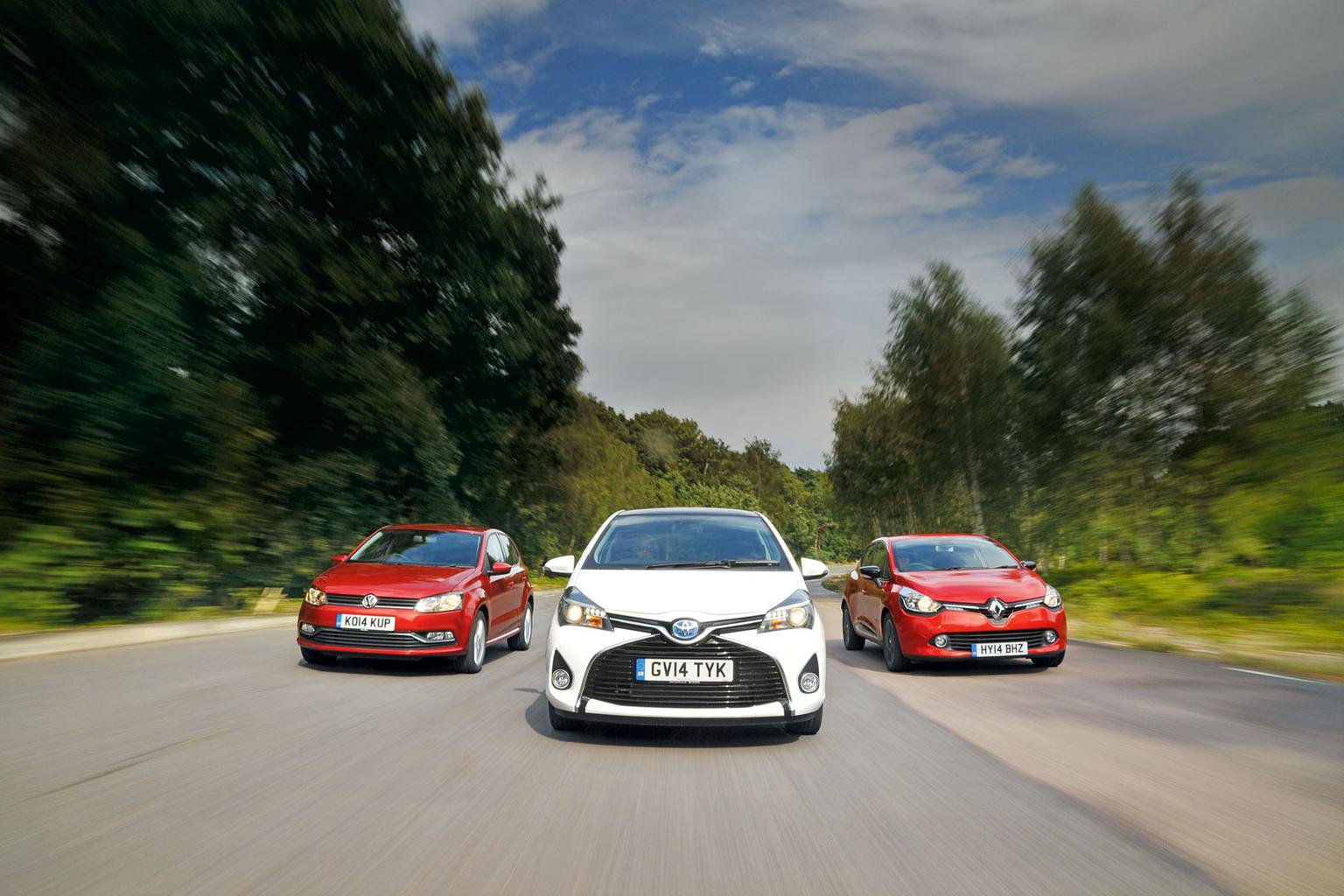 Diesel engines now dominate most sectors of the car market, but oil-burning superminis remain a slightly leftfield choice for private buyers. Company car drivers, however, like them for their excellent fuel economy, strong in-gear performance and low tax costs.

Now they’ve got something else to consider: the face-lifted petrol-electric Toyota Yaris Hybrid. It now has CO2 emissions of just 75g/km, which makes it the only non plug-in hybrid vehicle to qualify for the lowest (5%) company car tax bracket.

We’re pitting it against two talented rivals. The Volkswagen Polo has impressed in petrol form by beating the Ford Fiesta. This new diesel version could strengthen its status as the best small car. However, it will first have to beat our current favourite small diesel, the Renault Clio.

These cars are developed with a focus on fuel economy, so it’s no surprise that they can be a bit less engaging to drive than their petrol alternatives.

On paper, the Polo is the quickest off the line, but in practice the lighter Clio manages a cleaner getaway, and is easily the fastest in our tests from 30-70mph. Its four-cylinder diesel engine is more refined and flexible than the new three-cylinder unit in the Polo, and it’s less strained at speed, making it altogether more pleasant to drive.

The VW is frustrating. It has the most shove, and all 169lb ft is available from low revs, so it feels punchy in town. However, it also has a very narrow power band – there’s no point pushing it past 3500rpm – and frequent gearchanges are required to keep the engine on song.

Both diesel cars have five-speed manual gearboxes with long gearing to improve efficiency. The ’box in the Polo has a more precise shift than the Clio’s, but its clutch also has a high and sudden biting point, making the car quite easy to stall.

The Toyota is the odd one out. In most situations the petrol engine and electric motor work in tandem, and the instant oomph from the electric drivetrain means the Yaris was quickest from 0-30mph in our tests. Driven really gently, at speeds below 40mph, it can also operate solely on battery power, which means it’s surprisingly quiet. However, when you try to build speed on the motorway, or accelerate away from a junction, there’s a brief pause before the CVT automatic gearbox sends the engine revs soaring.

The new Polo has lowered suspension that has improved its agility at the expense of ride comfort; this SEL version comes on relatively large 16-inch wheels as standard, and you can feel the car fidgeting over small bumps. The Clio and the Yaris are both more composed, but while the Yaris feels heavy and unwilling to change direction, the Renault manages to be entertaining. It has the most grip, the most accurate steering and the best body control, so it’s the most enjoyable to drive.

One of the weakest areas for the Yaris used to be its dull, low-rent cabin – but that’s no longer the case. New soft-touch materials on the dashboard and along the doors, plus a smart new steering wheel, have really improved the perception of quality. True, there are still some scratchy materials lower down, but everything feels robust and solidly built. However, it’s the Polo that leads the way for fit and finish, with plush materials throughout.

The same can’t be said of the Clio. Apart from a few dashes of silver and gloss black, almost every surface is covered in hard and cheap plastics.

Still, at least it’s easy to get comfortable in the Renault. It has the most space up front and a wide range of adjustment for the driver’s seat and steering wheel, so even very tall drivers should have no trouble getting settled in for a long journey. The Yaris comes in a close second for front space, and has nicely supportive front seats, but the steering wheel is mounted low and it’s quite easy to catch your knees on it when climbing inside. Meanwhile, the Polo’s driver’s seat is mounted a bit high, but the boxy design means all-round visibility is excellent and the simple, upright dash is really intuitive to use.

Switch to the back seats and those travelling in the Toyota have the most room; rear legroom is very generous and the floor is flat, with no intrusive tunnel. Headroom is very similar in all of these cars, although there’s an annoying bump in the Yaris’s headlining, towards the rear of the roof, that forces you
to sit upright.

Each car can comfortably carry a family’s weekly shopping. The Clio has the biggest boot but the Polo’s is the most versatile, with a height-adjustable floor. That means it is the only car here without a noticeable step in the floor with the rear seats folded.

Occupants are well protected in the Clio and the Yaris, with six and seven airbags respectively, while the Polo has four – but you can add curtain airbags for £640. All three cars have a five-star rating from Euro NCAP, although the Clio has the highest scores for child and pedestrian safety.

This is where the Yaris makes most sense. Despite its complicated drivetrain, the hybrid Toyota is actually the cheapest car here to buy outright. Better still, it’ll cost a 20% rate taxpayer just £13 a month for the 2014-15 tax year in company car tax.

That’s almost a quarter of what you’d have to pay for the diesels, but things aren’t quite that simple. Because of changes to the benefit-in-kind tax rules over the next three years, the Toyota won’t be that cheap to run for long – although over three years you’ll still save around £600 in tax by choosing the Yaris over either diesel rival.

The Toyota also comes with the longest warranty (five years and 100,000 miles), is the cheapest of the three to insure and will cost the least to service; all three have fixed-price service plans for reasonable prices, but the Toyota’s tyres cost the least. The Polo counters with the slowest depreciation and
the cheapest leasing rates.

Yet for private buyers there is very little to choose between them, with differences in total costs over three years pretty marginal. Like most Renaults, the Clio struggles to retain its value, although it recorded the best economy figure in our real-world True MPG tests, with an impressive 60.1mpg. The Clio also has the biggest discounts.

It should be noted that if you spec the Yaris in Icon guise you have to do without kit such as cruise control and DAB digital radio.

If you’re a private buyer we’d still recommend seeking out the petrol versions of these cars, which are more refined, cheaper to buy and still pretty efficient.

However, the Yaris is an enticing company car, even with the forthcoming changes to tax rules taken into account. Add a spacious cabin with improved materials, and it’s a more convincing option than ever.

So it boils down to the conventional diesels, which are much trickier to separate. There’s no denying that the Clio is better to drive, with a more flexible engine, sharper steering and more grip than the Polo, although both still fall short of the Ford Fiesta, which remains the handling benchmark in this class. The VW counters strongly with a superb cabin, excellent infotainment system and cleverly designed, practical boot.

If you are spending a lot of time behind the wheel though, refinement and ride comfort are likely to be the deciding factors, and on that basis the Clio edges ahead. Its engine is more hushed and flexible than the three-cylinder unit in the Polo, it soaks up bumps in the road better and was more efficient in our real-world fuel economy tests. Both cars are fine choices, but the Clio remains the pick of the bunch when it comes to diesels.

Verdict A convincing all-rounder, let down by its engine

For Incredibly low company car tax; roomiest in the back; cheap to own; decent aride at low speed

Verdict Cheap as a company car, but it’s only at its best in town