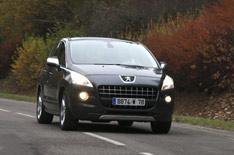 Here is the Peugeot 3008; a rival for the hugely successful Nissan Qashqai.

The Peugeot will arrive in the UK late this year. It is based on the 308 hatchback and looks a lot like the Prologue concept car that was one of the hits of last autumn's Paris motor show.

Power plants and drivetrains
The 3008 combines various features usually seen in MPVs, saloons and SUVs. It is 9cm longer and 11cm taller than a 308, but with a shorter front overhang, more space behind the rear wheels, to allow for a larger boot. The car also sits 35mm higher above the ground.

The 3008 is front-wheel-drive, but an optional five-position switch similar to Land Rover's Terrain Response system can adjust the standard stability control to give you more traction on muddy surfaces, or in snow.

In 2011, Peugeot will add a four-wheel-drive diesel-electric hybrid that develops 200bhp, yet has CO2 emissions of only 109g/km. The diesel engine sends power to the front wheels while the electric motor drives the rears, similar to a system being developed by Land Rover.

The chassis comes from the 308, but has been retuned to suit a taller, heavier car. The 150bhp petrol and diesel models have hydraulically-coupled rear shock absorbers to control the amount of lean when cornering.

Inside and out
Novelties for tech lovers include a pop-up glass pane behind the steering wheel to provide a head-up display of essential driver information, including the gap (in seconds) to the car ahead.

The styling makes the 3008 look similar to a scaled-down 4007 - Peugeot's large 4x4 based on the Mitsubishi Outlander.

There's plenty of space for five people and luggage, and the split rear seats and front passenger seat fold flat. There's also a three-position boot floor, allowing dirty or valuable items to be hidden from view.

Trim quality is a notch or two up on the already high levels of the 308. The unique dashboard houses a row of smart recessed toggle switches, while there's a triangular leather-covered grab handle in the centre console.

Sales details
The car will appear in public for the first time at the Geneva motor show in March and go on sale in mainland Europe soon afterwards. UK versions of the car will arrive in October. It is likely to carry a 1000 premium over a comparable 308 hatch.

Peugeot has confirmed that a conventional seven-seat compact MPV based on the 308 is also in the pipeline.