More for you |
Big savings on our Car of the Year Awards winners2020 new car sales revealed: who were the winners and losers?Top 10 used SUVs for less than £10,000Used test: BMW 1 Series vs Mercedes A-ClassNew Dacia Bigster large SUV – what we know so far
Home
News
Suzuki reveals S-Cross concept car
news

* Hints at new Suzuki SUV * Will have one of the lowest C02 figures in class * Boot space among class best, says Suzuki... 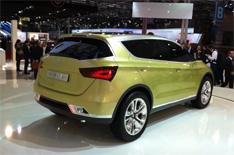 Suzuki has revealed its S-Cross concept car at the 2012 Paris motor show.

The concept car hints at a brand new SUV from the Japanese car maker; the first of a range of annual launches Suzuki has planned to start in 2013.

A production version of the S-Cross concept car is likely to have one of the lowest CO2 figures in its class. Luggage space will rival the best, too, according to Suzuki.

It looks set to be a rival for the likes of a Ford Kuga, Nissan Qashqai and Volkwagen Tiguan. The production version is due on sale next year.

Some design features on the S-Cross could make it into production, including the LED foglights, headlights and tail lights.