Most people will be able to find a driving position that suits using the entry-level seats that have four-way electric adjustment. However, we'd recommend forking out for the 14-way electric sports seats (standard on the Turbo), or even better the 18-way Adaptive Sports Seats Plus (standard on the Turbo S), both of which bring adjustable lumbar support and a memory function.

You sit close to the floor, which gives the 911 a suitably hunkered-down feel from behind the steering wheel, and the pedals are perfectly positioned. However, while the speedo and rev counter are directly in your line of sight and easy to read at a glance, you might find some other instruments, including the fuel gauge, are obscured by the steering wheel. The air-con controls are rather fiddly, too.

Driving a sports car usually involves making serious visibility sacrifices, but the 911 is surprisingly easy to see out of. Forward visibility is excellent, thanks to slim windscreen pillars. Those distinctive bulges around the tops of the headlights give you a clear idea of where the front wheels are, too, making the 911 easier to manoeuvre than rivals such as the Jaguar F-Type and Mercedes-AMG GT.

Even rear visibility isn't too bad, thanks to a deep rear window allowing you to place the back of the car accurately when reversing. Plus, front and rear parking sensors come as standard, with a reversing camera fitted to the Turbo and Turbo S and optional on lesser variants. 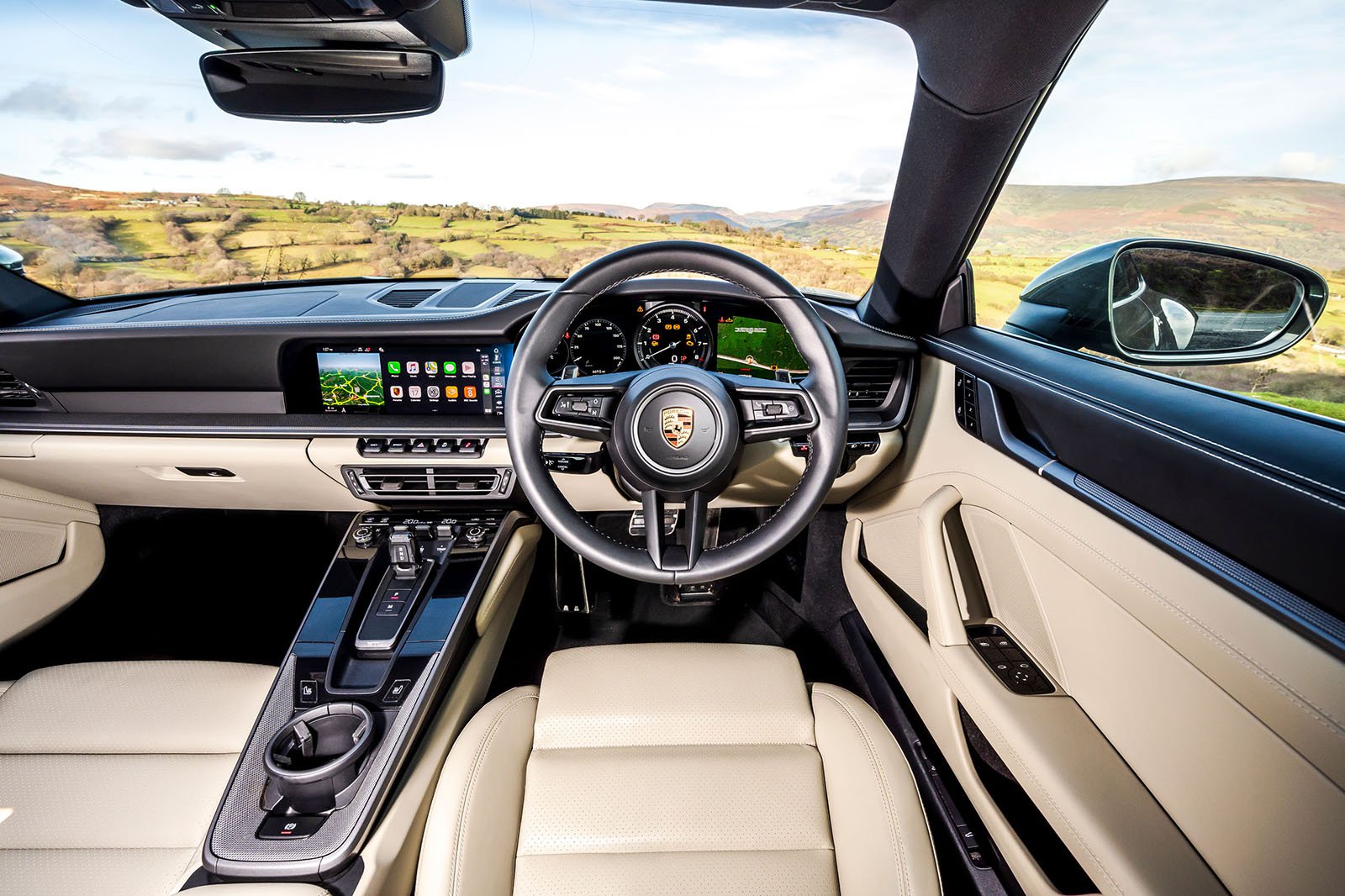 Porsche has acquired a reputation for being stingy with the amount of kit it fits to its cars, but the 911 comes with all of the infotainment essentials.

An 10.9in touchscreen is included in the price, which is quick to respond to prods and is placed within easy reach of both the driver and front passenger. True, being a touchscreen means it can still be a little distracting to use on the move, but it’s one of the best systems of its kind and comes with Apple CarPlay and Android Auto smartphone mirroring as standard.

You also get an eight-speaker stereo and a DAB digital radio. However, if you’re a bit of an audiophile, it’s worth considering the Bose and Burmester sound systems – the latter being particularly impressive. The Turbo and Turbo S get the Bose system as standard.

Most of the buttons and switches are well damped and the dashboard and other fixtures feel reassuringly study. Certainly compared with the Aston Martin Vantage and Mercedes-AMG GT, the 911 has a suitably impressive interior.

However, the 911 doesn't feel quite as rock-solid inside as an Audi R8, and you might think the interior looks a little plain unless you delve into the huge personalisation options list.