Even the 'entry-level' Carrera delivers crushing straight-line pace (0-62mph takes just 4.2sec). With peak torque arriving at just 1900rpm, you could be mistaken for assuming the 3.0-litre engine doesn’t like to be revved. However, unlike so many modern turbocharged engines that run out of puff higher up in the rev range, the 911’s flat-six is utterly relentless all the way to its relatively heady 7500rpm limiter.

Indeed, it's so quick it makes the Carrera S seem somewhat unnecessary. This lowers the 0-62mph time to 3.7sec if you stick with the standard eight-speed PDK automatic gearbox but, as it stands, the Carrera S is the only engine available with a manual 'box. It's not an especially popular option, but it is definitely worth considering if you value some old-school interaction with the car. The Carrera and Carrera S are both available with optional four-wheel drive (look out for the '4' badge), but traction is so good in the rear-wheel drive versions it makes the extra expense unnecessary.

All 911s come with adaptive suspension (PASM in Porsche speak) as standard, which means you can effectively change the stiffness of the suspension to suit the type of driving you're doing. However, in the Carrera and Carrera S, the regular setting only works well around town, where it takes the sting out of sharp-edged bumps and prevents you from being jostled around too much.

Get out on to the open road and you'll start to notice body control becoming surprisingly loose, with the car bucking and bouncing along any surface that isn't perfectly smooth. Switching to the firmer Sport setting stops this from happening and, to be frank, is the setting we'd choose for the vast majority of British roads. 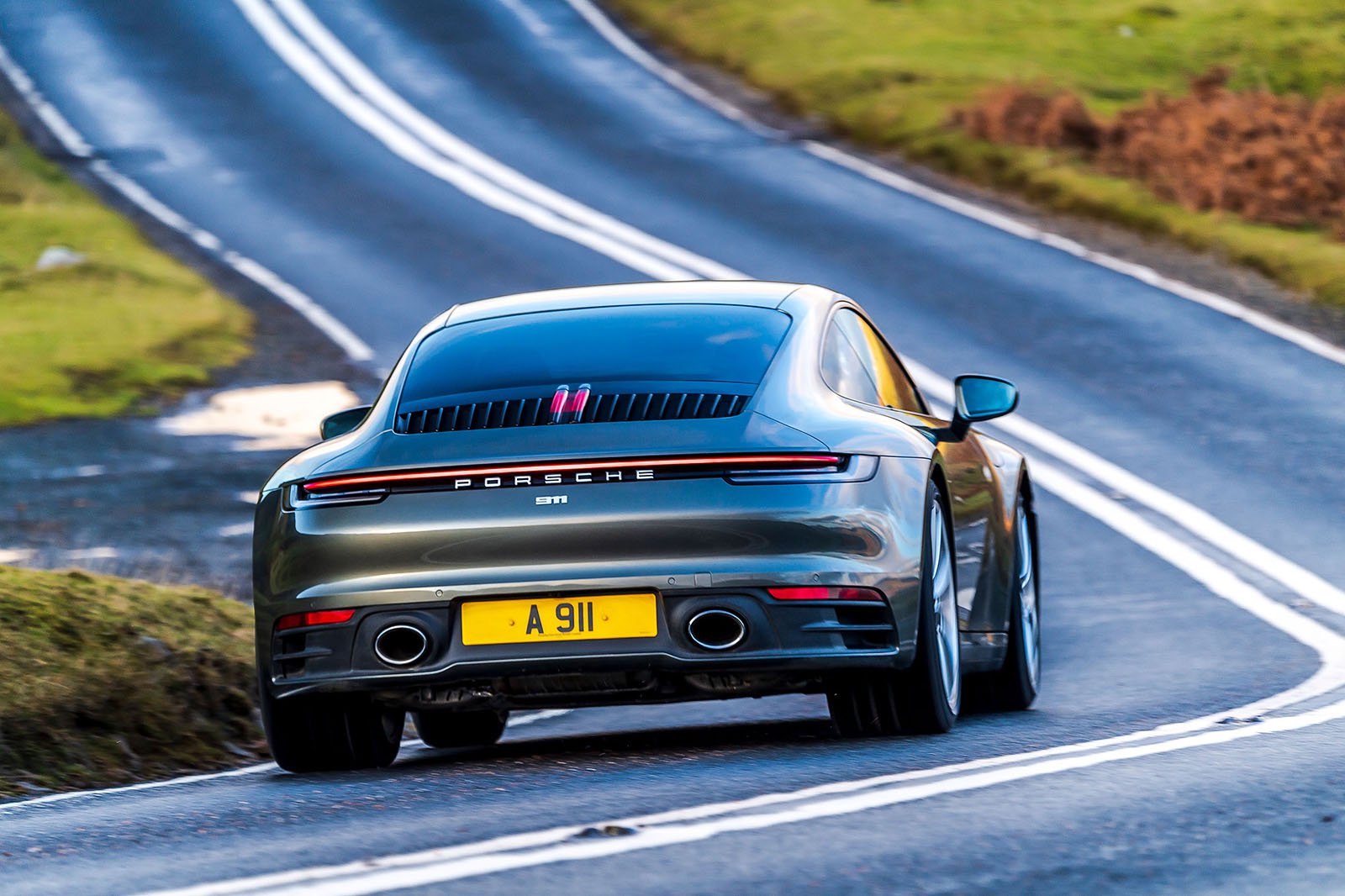 Thanks to beautifully weighted steering that’s both communicative and incredibly accurate, you can push right up to the limit of grip with utter confidence – something that can’t be said of the Aston Martin Vantage or Mercedes-AMG GT.

The rear-wheel drive versions of the Carrera and Carrera S are slightly more rewarding (and considerably lighter) than four-wheel drive models, including the Turbo and Turbo S. That's because when you're cornering really hard in the latter, the front wheels try to help claw you out of corners, giving the car a less natural balance. It's certainly effective, though.

What’s more, as long as you've switched the suspension to Sport mode, body control is exceptional. True, the mid-engined Audi R8 is even better in that respect, but it's also more expensive than Carrera versions of the 911 and a lot less practical.

When fitted with the optional sports exhaust, the Carrera and Carrera S make a full-blooded and thrilling howl when you put your foot down. Alternatively, for those moments when you’re not in the mood, you can turn the volume down to ensure that the engine never gets too boomy or intrusive. The Turbo models are certainly loud but, perhaps surprisingly, don't sound as tuneful.

The 911 still isn’t an especially refined choice for covering lots of miles, though. You'll hear wind whistle from around the frameless side windows at motorway speeds and the wide tyres generate a lot of noise over coarse surfaces. Consider the BMW M8 if you're looking for a more agreeable long-distance cruiser.

The eight-speed PDK automatic gearbox doesn't only shift extremely quickly, it also does so surprisingly smoothly. And the optional seven-speed manual 'box (exclusive to the Carrera S) is one of the best fitted to any sports car.