There's less head room in the front of the Captur than there is in the Ford Puma, Skoda Kamiq or Volkswagen T-Cross. It's still okay for six-footers, but bear in mind adding the optional sunroof exacerbates the problem. The interior width is generous, though, so at least you won’t be rubbing shoulders with your passenger, and there's plenty of leg room.

Storage isn’t lacking; there’s a big tray in front of the gearlever and another one below, if you have the automatic gearbox is fitted. We wish the cubby under the central armrest were bigger, though.

Even with its sliding rear bench pushed all the way back (see below for more on that), space is adequate rather than amazing. A six-footer will find their head is rather close to the roof, and knee room will be tight if there’s someone of a similar height sitting in front. Not helping matters, the roof curves in at the side, so even if you're not that tall, it can still feel claustrophobic.

Try to fit three adults in the back and it'll be a squeeze, although the middle passenger will appreciate the decent amount of foot space created by the Captur’s flattish floor. It’s also worth pointing out that E-Tech hybrid models are just as spacious as non-hybrid Capturs. If you want more rear space, the Kamiq and Countryman are your best bets. 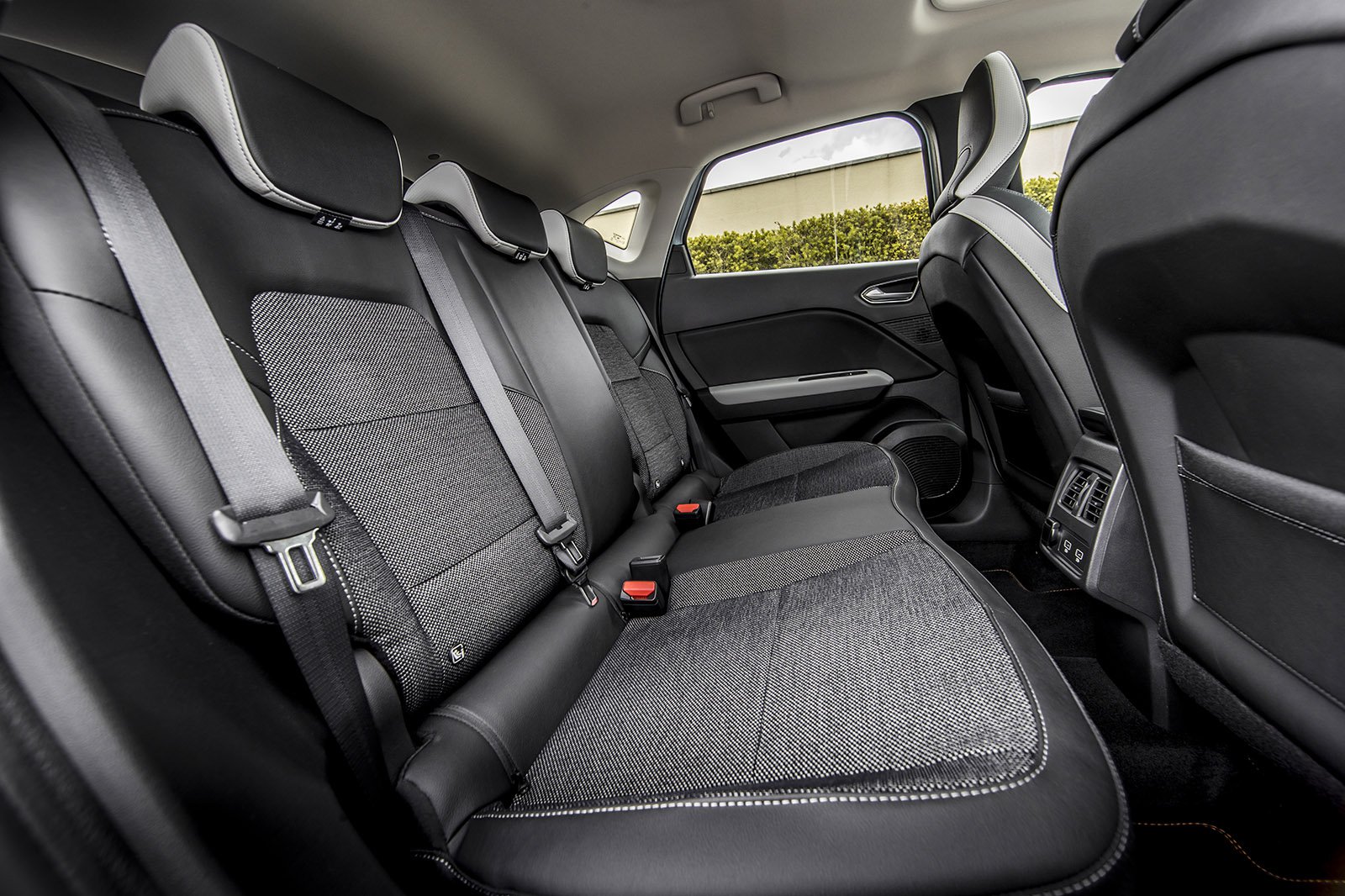 As is the case with the Volkswagen T-Cross, you can slide the Captur’s rear bench back and forth to extend the boot space at the expense of rear leg room. It's a useful feature, and while the base slides as one piece, the rear seatbacks fold in a conventional 60/40 fashion.

That Mini Countryman is better, though. Its rear seats don't only slide, they also recline, plus they're split in a more flexible 40/20/40 arrangement, to give you even greater flexibility over your seating and luggage needs. Back to the Captur, and we're afraid to report that your front passenger won't have much flexibility at all: there’s no front passenger seat height adjustment – unless you add the optional Comfort Pack, which is available only on the higher trims – or lumbar adjustment.

Renault claims class-leading boot space for the Captur, but there’s a caveat. That’s only if you slide the rear bench all the way forwards, which doesn't leave much rear leg room.

With the bench in its normal position (i.e. all the way back to maximise rear leg room), the boot space is 422 litres. That’s more than you get in most family hatchbacks, such as the Volkswagen Golf, and we squeezed in six carry-on cases below the Captur's rear parcel shelf. That’s pretty good, but the Ford Puma managed eight and the Skoda Kamiq seven, should you need even more practical options.

To further boost versatility, every Captur except the E-Tech hybrids have a variable-height boot floor. When it's set to its higher position, the floor is virtually level with the boot opening so there's no lip to lift heavy items over. It also makes the extended load area flat when the rear seats are folded down. Just bear in mind that the E-Tech hybrid has a smaller 379 litre boot because of the electrical bits and pieces beneath its boot floor, where you'll also find a handy cable storage compartment.