With the TCe 90 engine fitted, the Renault Clio has a similar amount of power to our recommended VW Polo 1.0 TSI 95, which you'd expect to make it feel just as punchy on the road. Sadly, though, it doesn’t, and the lower torque output means it doesn’t perform as well from low revs so you have to work the engine hard to make progress.

A-road overtakes are possible if you get it spinning past 5000rpm, but the Seat Ibiza and the Polo are far more flexible, and therefore easier to drive. With that in mind, we’d avoid the less powerful non-turbocharged SCe 65.

The E-Tech Hybrid is now the Clio engine of choice for those who prioritise efficiency. It’s punchier than the TCe 90, and even when it’s running in fully electric mode there’s a surprising amount of poke off the line. It can occasionally take a second or two for the petrol engine to kick in after treading hard on the accelerator, but you never feel like a sitting duck thanks to that initial burst of acceleration. It’s a genuinely impressive set-up.

Although by class standards we wouldn’t describe the Clio as uncomfortable, there’s no doubt that the VW Polo is a far more absorbent companion on bumpy roads. The Clio can’t quite round off imperfect road surfaces as well as the Polo, fidgeting more than its German rival, resulting in a choppy ride.

More of concern, though, is the way potholes and ridges thud through the car’s body as the suspension fails to soak them up, even on the smaller 16in alloy wheels. Those impacts never cause the car’s body movements to feel uncontrolled, but you feel everything except freshly laid Tarmac through the seat. 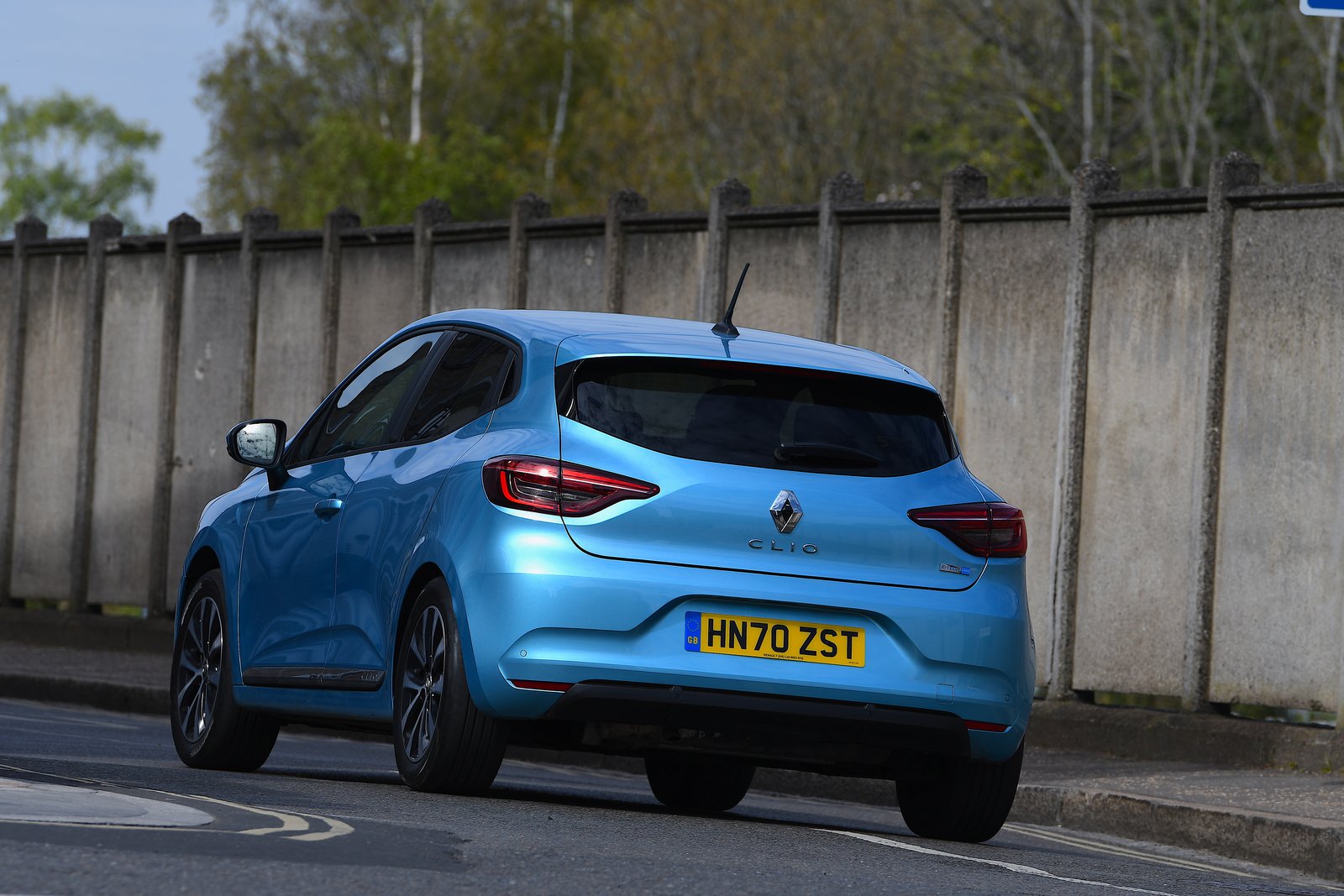 Pitch the Clio into a corner briskly and you’ll find that body lean is kept nicely under control, yet there’s little sense of fun to be had from driving it down a winding country road in a spirited manner. The Ford Fiesta is the car to go for if that's what you're looking for.

The steering feels a bit vague and you have to turn the wheel a little more than you’d expect when manoeuvring at slow speeds. It never gives a great sense of connection to the front wheels, either, although selecting the Sport mode, where fitted (it’s standard on RS Line models), does add weight to the helm for an extra bit of reassurance.

One thing’s for sure, if you start to push the Clio hard, you’ll feel it gently and safely running wide at the front before the stability control kicks in to rein it back in. It’s safe, but the Fiesta and VW Polo both grip more evenly from front to rear.

If you try to pull away from a standstill at low revs with the 1.0-litre TCe 90 petrol engine, you’ll notice some vibration through the Clio's steering wheel, pedals and gearlever. The gearshift itself is hampered by an overly large gearknob, which isn’t particularly comfortable to hold, and fifth gear requires a deliberate hand before it engages, but the knob is high in the centre console for easy reach.

In the E-Tech hybrid, there’s a bit of motor whine when it’s running on electricity, but when the petrol engine chimes in it does so with barely a murmur and is smoother than the hybrid Toyota Yaris. The E-Tech’s engine is quiet when accelerating, only getting vocal when you really push it.

The brakes feel quite sensitive, but you get used to them quickly. There’s quite a lot of wind noise at higher speeds in all models, and that combined with the vibrations coming from the engines can make for a slightly tiresome driving experience.