Although the Dacia Sandero is exceptionally cheap for a well-specified small car, the Fabia is the next best thing. We'd suggest avoiding the cheapest S trim and the gutless 1.0 MPi 60 engine, and go instead for a 1.0 TSI 95 SE, which is cheaper than the equivalent Seat Ibiza and a lot cheaper than a competing Ford Fiesta or Volkswagen Polo. If you're buying on PCP finance, Skoda usually offers some enticing deposit contribution deals to reduce the monthly payments.

The Fabia depreciates at about the same rate as a Fiesta and Ibiza, but the fact that it's cheaper to start with – helped by reasonable dealer discounts – means you'll actually lose less money after three years. The Sandero has better resale values, though, while the Honda Jazz, which is pricey to start with, is exceptional in this regard.

The hybrid Jazz and Toyota Yaris are very economical, too, but the Fabia’s exclusively petrol line-up isn't exactly juicy. The 1.0 TSI 95 should average between 45-50 mpg in the real world depending on how you drive. Its reasonably low CO2 emissions and the Fabia's cheap P11D value also make it a sensible company car.

Entry-level S trim misses out on some kit most people would consider the norm these days, such as air-conditioning and alloy wheels. A glance at the equipment list confirms why SE makes more sense – 15in alloy wheels, air-con and a leather steering wheel and gear lever all feature, along with infotainment and reversing-sensor upgrades. It even comes with an umbrella under the passenger seat for rainy days.

SE Drive adds sat-nav and front and rear parking sensors, as we've said, but is almost as pricey as SE L trim. That comes with a lot more stuff – auto lights, 16in alloys, LED rear lights, cruise control, climate control, an auto-dimming rear-view mirror and keyless start – so is worth considering if you can get a good deal.

Colour Edition models are based on the SE spec, but only really add cruise control to the kit list, with the other changes purely cosmetic, such as a two-tone roof and matching alloy wheels. Monte Carlo trim is meant to be sportier but doesn't really handle any more impressively so it's more about the added looks, which aren't really worth the extra. 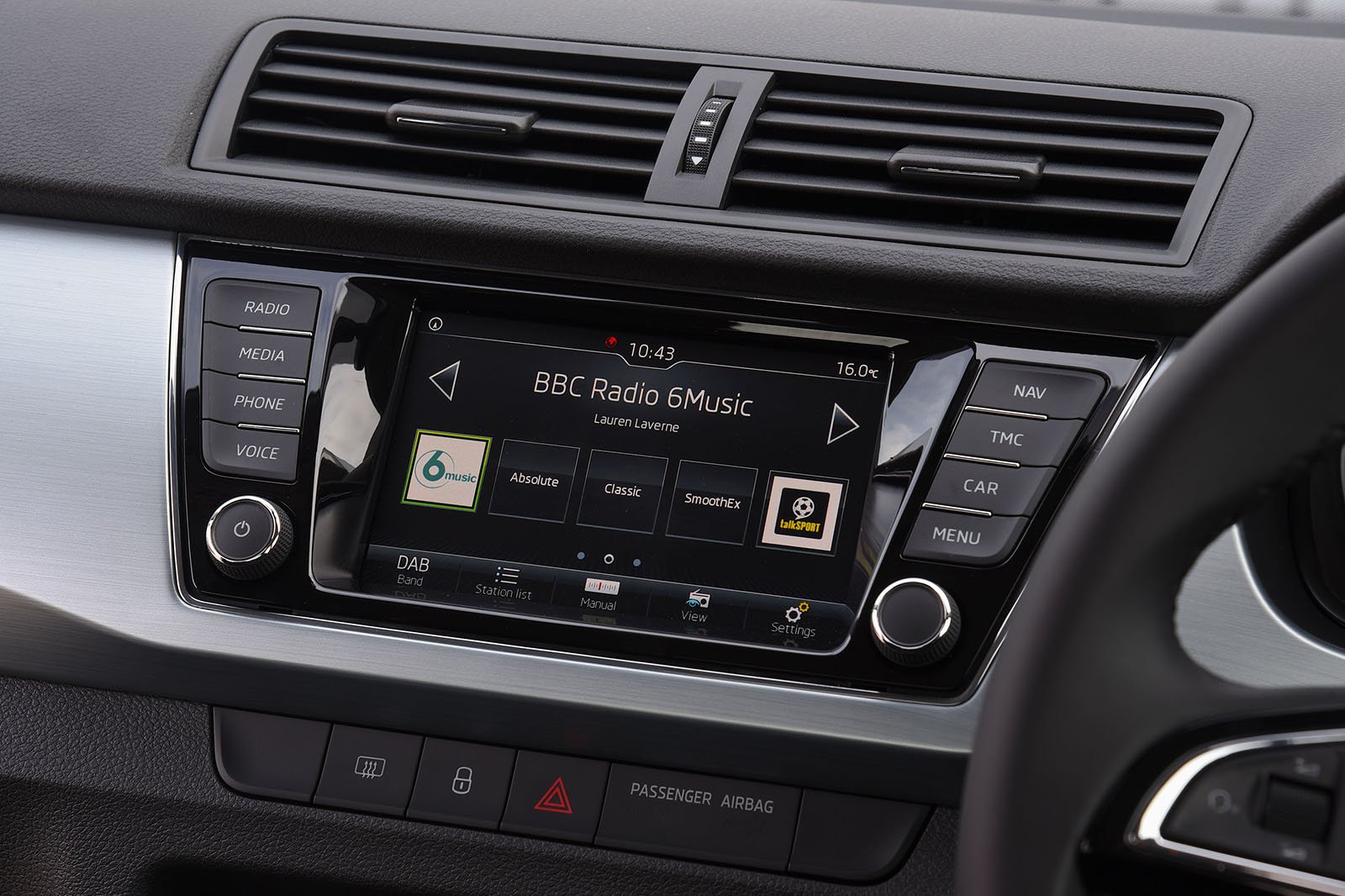 The Fabia was one of the more reliable small cars that featured in the 2020 What Car? Reliability Survey, proving more dependable than the Fiesta, Polo and Ibiza and beaten only by the Suzuki Swift in the class.

Meanwhile, Skoda as a brand finished a very respectable fifth (out of 31 manufacturers) in the overall league table, placing it above most competing brands apart from Mini and Toyota.

A three-year warranty limited to 60,000 miles comes as standard with every Skoda. That’s typical of most car makers, but not as good as Hyundai’s five years/ unlimited or Kia’s seven years/ 100,000 miles.

All Fabias come with six airbags, a tyre pressure-monitoring system and Isofix child seat fixings on the outer rear seats. An engine immobiliser is standard, too, although you'll need to upgrade to at least SE trim for an alarm.

The Fabia also gets automatic emergency braking (AEB) as standard; it's a system designed to perform an emergency stop if it senses that you're about to slam into the car in front. From SE trim and up, you can also add blindspot monitoring and a driver fatigue alert system that warns the driver if he or she is becoming drowsy.

Although the Fabia has been appraised for safety by Euro NCAP, this was way back in 2014 at a time when the tests were far less stringent than they are today. As such, it's hard to draw comparisons with more modern rivals, such as the Jazz. Indeed, on Euro NCAP's website, it says the Fabia's 2014 safety rating is no longer valid.