Despite only coming with front-wheel drive, the 2.0 TSI 245 makes for the fastest Skoda Octavia vRS from 0-62mph, taking a respectable 6.7sec when fitted with the dual-clutch DSG automatic gearbox.

The front-wheel-drive diesel (2.0 TDI 200) and the plug-in hybrid (1.4 TSI iV) both take more than 7.0sec to complete the sprint, although the diesel does it in a more eager 6.8sec in four-wheel-drive form. Even so, while the TDI’s strong low-down pull makes driving briskly effortless, it's an effective rather than enjoyable engine that's not all that quick on the move.

On the road, you’ll find the TSI 245 certainly feels substantially quicker than the TDI. It’s not quite as punchy low down, but there’s plenty of pace at the top end for easy overtakes. Nevertheless, it finds itself at the slower end of the hot hatch class, with even the Ford Fiesta ST proving faster outright. Compared with the similarly practical 316bhp Honda Civic Type R – let alone the flyweight Toyota GR Yaris – the TSI 245 is positively pedestrian.

With a 0-62mph time of 7.3sec, the plug-in hybrid vRS iV is again on the lukewarm side of hot hatches, even if that figure is quite brisk for a car with such a low official CO2 figure. With much of that total input coming from a fast-acting electric motor, rapid acceleration from low speeds can generate plenty of wheelspin and will have the steering wheel twisting slightly in your hands.

Once it hooks up, performance is pleasingly muscular, and the iV feels swifter than the TDI on the move. Plus, being a plug-in hybrid, it has the added bonus of being able to travel on pure electric power alone for up to 43 miles, officially.

Unlike the TDI diesel and iV plug-in models, the TSI petrol’s traction is assisted by an electronically controlled limited-slip front differential. This certainly helps to apply power on sharper bends, although it's not as aggressive as a Civic Type R and never feels as though it can tighten the car’s line around a bend when you've put your foot down.

Its real benefit is that it all but eliminates torque steer (the sensation of the steering wheel writhing in your hands when you accelerate). If you’re more concerned about traction through a muddy field instead of a race track, the four-wheel-drive TDI vRS will be your best bet. You get mild off-road assistance and a boost in straight-line performance, but most buyers will be better off with front-wheel-drive versions.

TDI and TSI models get lower, stiffer sports suspension as standard, something that’s absent on the iV version. This sports suspension is a fair bit stiffer than a regular Octavia’s, while the optional DCC adaptive set-up allows you to stiffen it even more with a prod of the touchscreen. Even with the DCC switched to its firmest setting, you’ll experience more body lean and have less agility than in the Civic Type R.

That’s not to say you can’t hustle a vRS along your favourite B-road briskly; it’s just that most rivals will put a bigger smile on your face, especially the scalpel-like Civic Type R and rambunctious Renault Megane RS or GR Yaris. Unsurprisingly, the heavier vRS iV is even less of a hoot. While it certainly hides its weight well for a plug-in, you’re all too aware of how that mass and its softer suspension hurts the car’s agility, despite it gripping well.

On the other hand, with a whole family on board, you’ll find that any Octavia vRS ranks among the comfier hot hatches out there, especially with the optional DCC set to Comfort mode. Although it will sometimes thump and thud over sharp ridges and potholes, especially when accelerating hard, the vRS is a smooth motorway cruiser and has far better body control over undulating roads than the sometimes wallowy standard Octavia. The vRS’s Civic Type R rival also has a surprisingly supple ride when its standard adaptive dampers are set to Comfort, though.

As well as the thudding from the suspension we mentioned above, there’s a bit of wind and road roar to contend with in the vRS. It’s not too bothersome, but it can have you clicking the stereo’s volume up a few notches on the motorway in order to hear things clearly. A six-speed manual is offered only on the TSI 245, and while it does allow for do-it-yourself gear swapping, the notchy lever action and numb clutch pedal action add nothing to the experience – unlike the sweet 'box found in the Civic Type R.

The DSG gearbox (standard in the TDI and TSI iV, optional on the TSI 245) shifts quickly and near seamlessly between ratios, although it isn’t as smooth as the best 'boxes when manoeuvring at low speeds. The iV’s gearbox is similarly proficient on the move and better at lower speeds to boot. It switches between power sources without fuss.

There’s no doubt the TSI is the sportiest-sounding Skoda Octavia vRS, sounding better than the gritty diesel. The iV also sounds enthusiastic enough, even with just 1.4 litres under the bonnet; indeed, the sound symposer fitted as standard in the UK makes all the engines sound beefier with a little help from the stereo’s speakers. 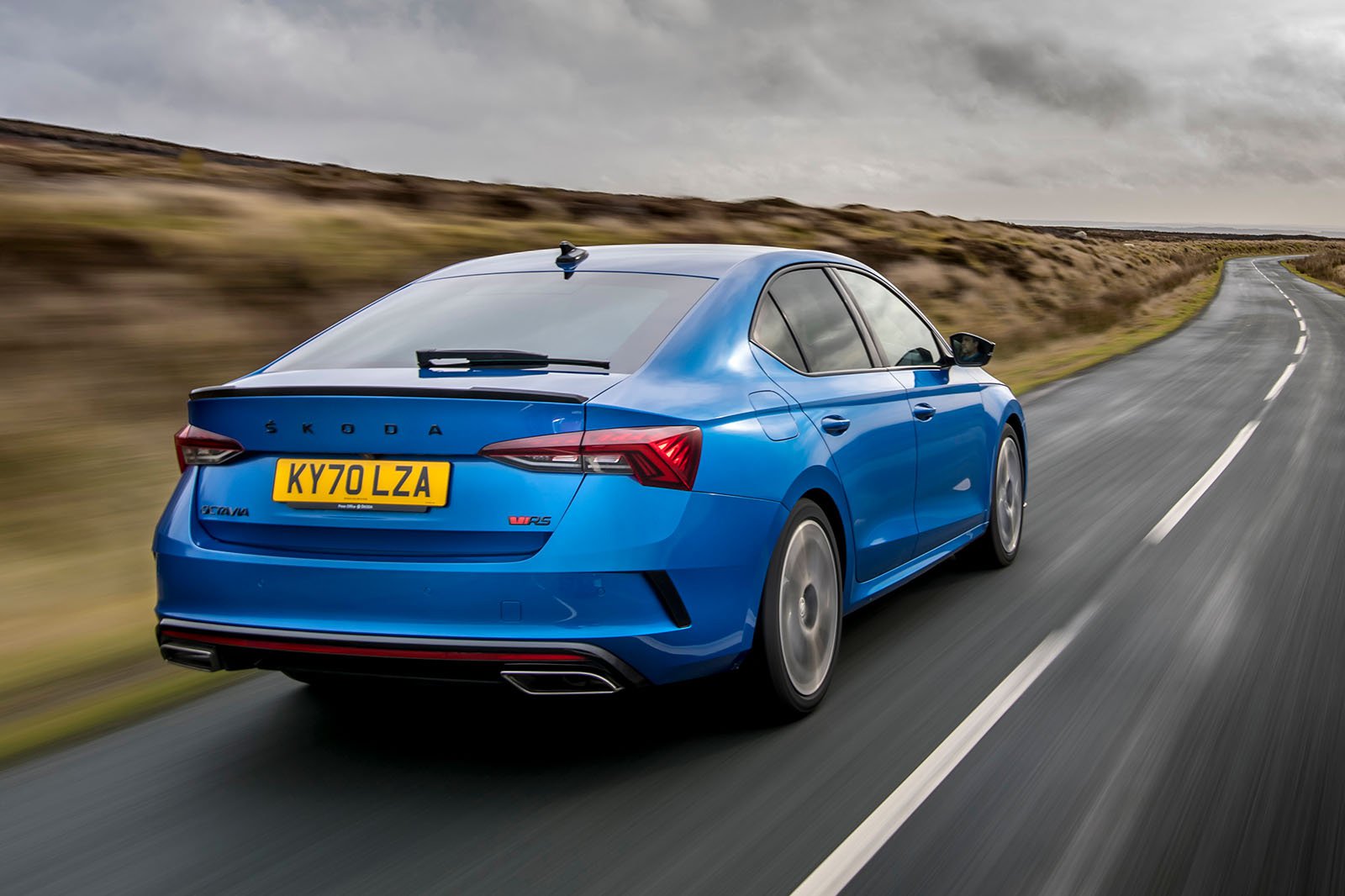