The latest Volvo V90 is available exclusively with 2.0-litre, four-cylinder engines. Don’t think that means a lack of choice, though, because there are many power iterations. As we said in the introduction, the petrols and diesel are mild hybrids, which enhances efficiency, while the plug-in hybrid offers sustained electric-only running.

Let’s begin with the diesel. It has 194bhp and is called the B4 (D). It’s a torquey engine, so it can pull a trailer without too much effort, but it doesn’t feel quite as quick as the equivalent Audi A6 Avant 40 TDI or Mercedes E220d Estate, even though its claimed 0-62mph time (8.5sec) is competitive. It’s still a good option, though.

If you don’t want a diesel, the 194bhp B4 (P) can hit 0-62mph in 7.9sec. That makes it lively if you're prepared to wind it up but it's also flexible in everyday driving. It's our pick, partly because it's available with the entry-level Momentum trim. The 247bhp B5 (P) isn't, but if you have the wherewithal it knocks a second off the B4 (P)’s acceleration time, it’s more energetic at motorway speeds and the extra oomph is handy in a car designed to carry people plus their luggage.

The 297bhp B6 (P) is quicker still (0-62mph in 6.2sec) and has four-wheel drive, but unless you have the need for speed or the added traction on greasy roads, it’s nice rather than necessary.

If you fancy a plug-in hybrid, the Recharge T6 is a good bet. It has a 250bhp petrol engine plus 86bhp extra from an electric motor driving the rear wheels (so it’s also four-wheel drive). The 0-62mph time is a claimed 5.9sec, but, while it doesn’t feel as rapid as you might expect (partly because the eight-speed automatic gearbox takes time to react, as it does with all V90s), it’s officially quicker than the BMW 530e Touring.

Naturally, the T6 is quite a bit slower running in electric mode but still tops 70mph. Reckon on about 25 miles of electric range in the real world, but the official range is 35 miles, which is the same as the 530e’s. It is, of course, near-silent when it’s in electric mode and shuffles seamlessly between its two power sources.

All the engines have an unobtrusive stop/start system, but the diesel is a lot noisier when it’s running than an A6 Avant diesel – there’s a slight rumble at idle that seems out of sorts with a premium estate, although that fades into the background once you’re moving. The petrols are quieter but not silky smooth like the six-cylinder engines you can order in the A6 Avant, 5 Series Touring and E-Class Estate.

The eight-speed automatic gearbox fitted to all models changes smoothly, albeit without quite matching the seamless shifts of the 5 Series.

At speed, it's only the ruffle of wind noise from the V90's big door mirrors that is particularly noticeable because road noise is kept nicely at bay. So, overall it’s good, but an A6 Avant is definitely quieter at 70mph.

Ride comfort is crucial in family estates, and this is another area in which the V90 impresses. If you tick the box for the optional adaptive dampers, which includes air suspension at the rear, it helps the V90 glide along motorways with a relaxing buoyancy. In town, only particularly vicious ridges thud through the body, which is something the E-Class Estate tends to suffer from too.

V90s are quite a bit softer than the 5 Series Touring in M Sports trim. Even without adaptive dampers, the V90 is comfortable enough, but avoid the biggest wheel options regardless of the type of suspension fitted if you want the best ride.

The adaptive dampers sharpen up the V90’s handling, making it marginally more composed through corners than the 5 Series. It doesn’t handle or steer as well as the Jaguar XF Sportbrake, with less of a a sense of connection to the road.

With the standard suspension, the V90 falls short of both the 5 Series and the E-Class for handling, feeling a closer match to the slightly ponderous A6 Avant. It’s worth noting that the heavy battery in the T6 makes it feel less agile than the other models. 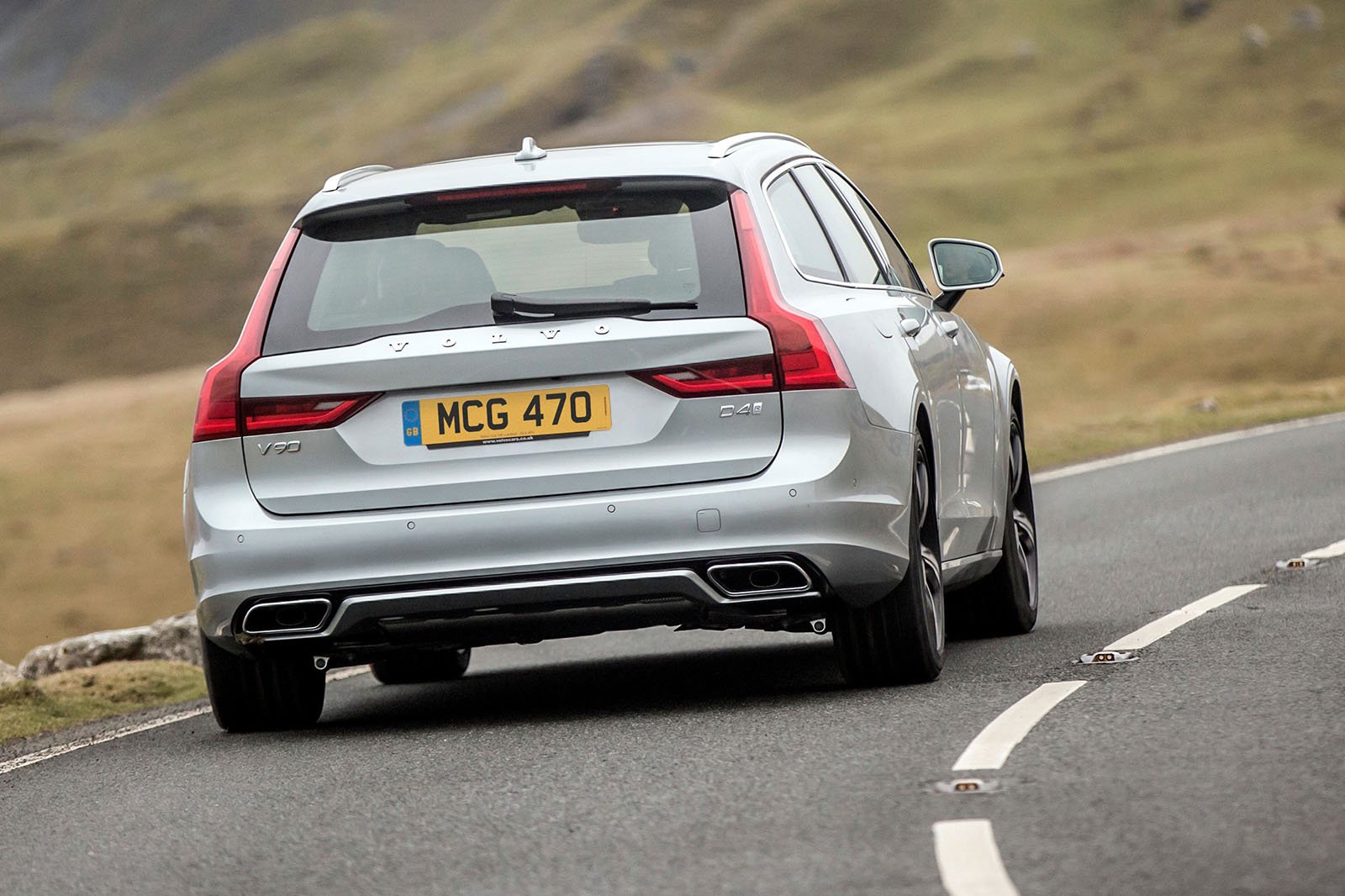