The X2 may have a lower roof compared with the X1, but there’s still enough head room for six-foot-plus adults. However, the interior isn't much wider than that of many standard family hatchbacks, such as the Volkswagen Golf, so don’t expect the X2 to feel as airy inside as the Volvo XC40.

There’s a pair of cupholders up front that are deep enough to hold large takeaway cups, while the cubby in front of the gearlever makes a convenient spot to store smaller items. The centre armrest is a handy place to hide your phone and connect it to the USB input, plus you can stow a 500ml bottle in there, too.

While front-seat passengers aren’t too affected by the lower coupé roof, those in the back certainly are. Head room is noticeably tighter than in the X1, so taller adults will find their head rather close to the ceiling. We suspect this will be even more of a problem should you tick the box for the optional panoramic roof.

In fact, even without the panoramic roof, head room is significantly less generous than you’ll find in a Volvo XC40 and there’s less rear leg room, too. The X2 is also rather narrow in the back compared to its rivals, making it a real squeeze for three adults on the rear bench. In addition, the middle occupant will find foot space tight, no thanks to a big hump in the floor. 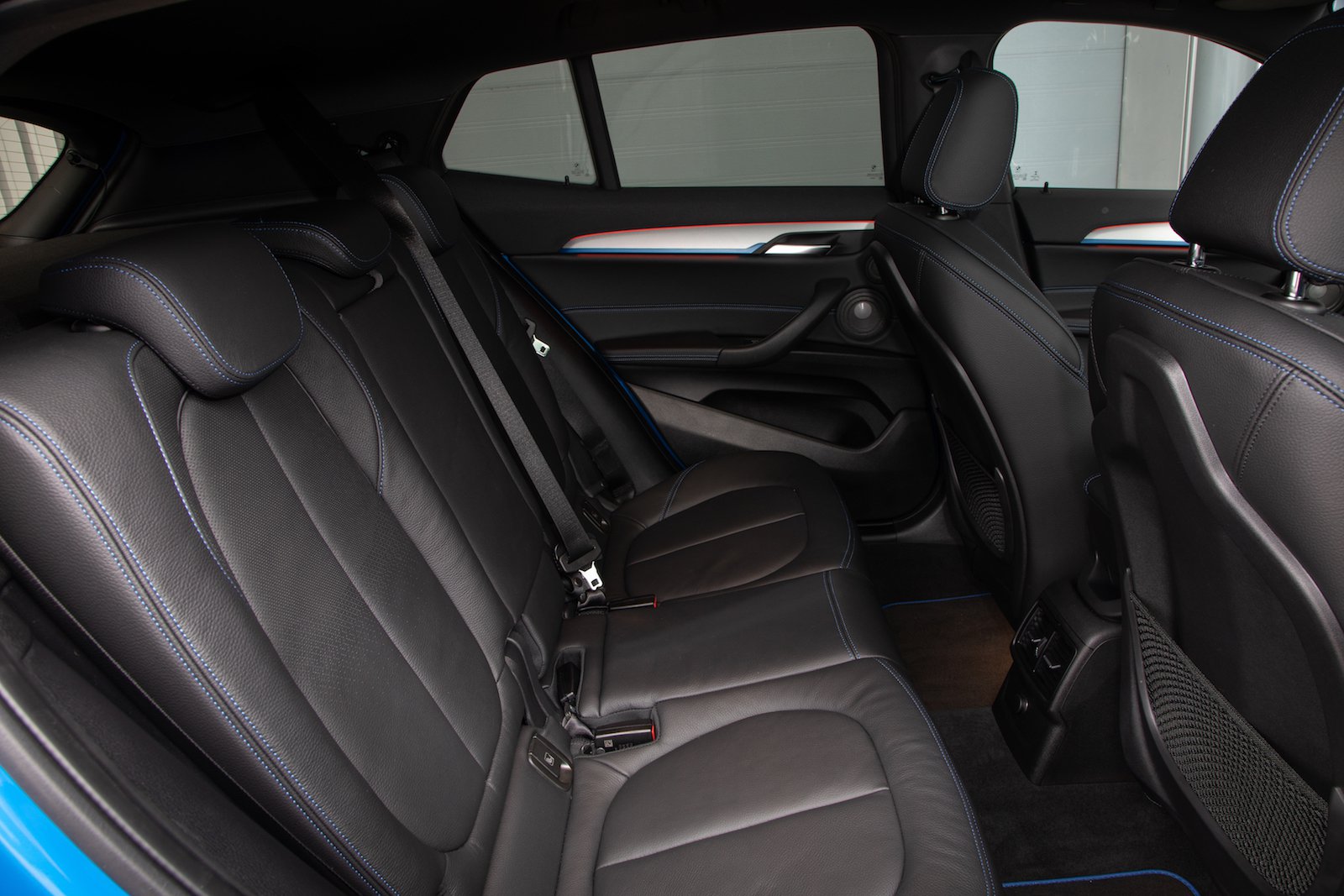 Although the X1 has an impressive array of practical touches, the X2 is rather less generously provisioned. For instance, there’s no option for sliding rear seats to prioritise either leg room or boot space; instead, you have to make do with just a two-position reclining backrest.

What you do get is a standard 40/20/40 split-folding rear bench, so you can carry long loads and still fit four people comfortably. The manual release catches are mounted on the rear bench, and there’s no option of an electric folding mechanism.

The front passenger seat has a wide range of adjustments, and you can add electric driver and passenger seat operation and variable lumbar support, by adding the optional Comfort pack.

All X2 models have a powered tailgate that makes life that bit easier.The boot is also a usefully square shape and has handy nets, underfloor storage, elasticated straps and a 12V socket.

Its shorter rear overhang does reduce boot space by 35 litres compared with the X1, but there’s still 470 litres in total. However, that’s a fair bit less than you’ll find in an XC40 – and those in search of a versatile SUV might not want to sacrifice useable space for that stylishly sweeping roofline. Saying that, we did manage to fit one more more carry-on suitcase in the X2 than the six we could fit in the Jaguar E-Pace.