The only real bugbear with the Kia Picanto's driving position is that – like all city cars – its steering wheel adjusts for height and not reach. Still, its driving position still works well for most people, somehow, and it's certainly better than the Volkswagen Up's, which tends to block the instruments.

The driver’s seat is supportive, despite the lack of lumbar adjustment – another commonality with rivals at this end of the market – and has enough side bolstering to stop you sliding around in corners. Thanks to well-aligned pedals and the driver’s seat height adjustment (on all but the entry-level trim), it's really comfortable, even on a long trip. '3' trim and above even adds a front centre armrest to lean on as well.

Meanwhile, the dashboard layout is as simple as it gets and a doddle to understand, with well-placed buttons that are big enough to spot easily on the move.

You can't have fancy LED headlights on a Picanto, and its halogen headlights aren't the brightest at night, but seeing out of the front during daylight hours isn't a problem, with its slim front pillars and deep, wide windscreen. The same is true when you’re looking out of the side windows while tackling junctions and roundabouts.

The rear side windows are slightly smaller, but rear passengers are unlikely to feel claustrophobic; the Picanto is relatively bright and airy in the back compared with most city cars.

The rear pillars are chunkier and the rear screen is relatively small, but even so, over-the-shoulder visibility is slightly better than it is in a Hyundai i10 and much better than the Dacia Sandero. It's a shame that rear parking sensors and a rear-view camera are available only on the mid and upper trims, with no option to add them on the cheaper variants. 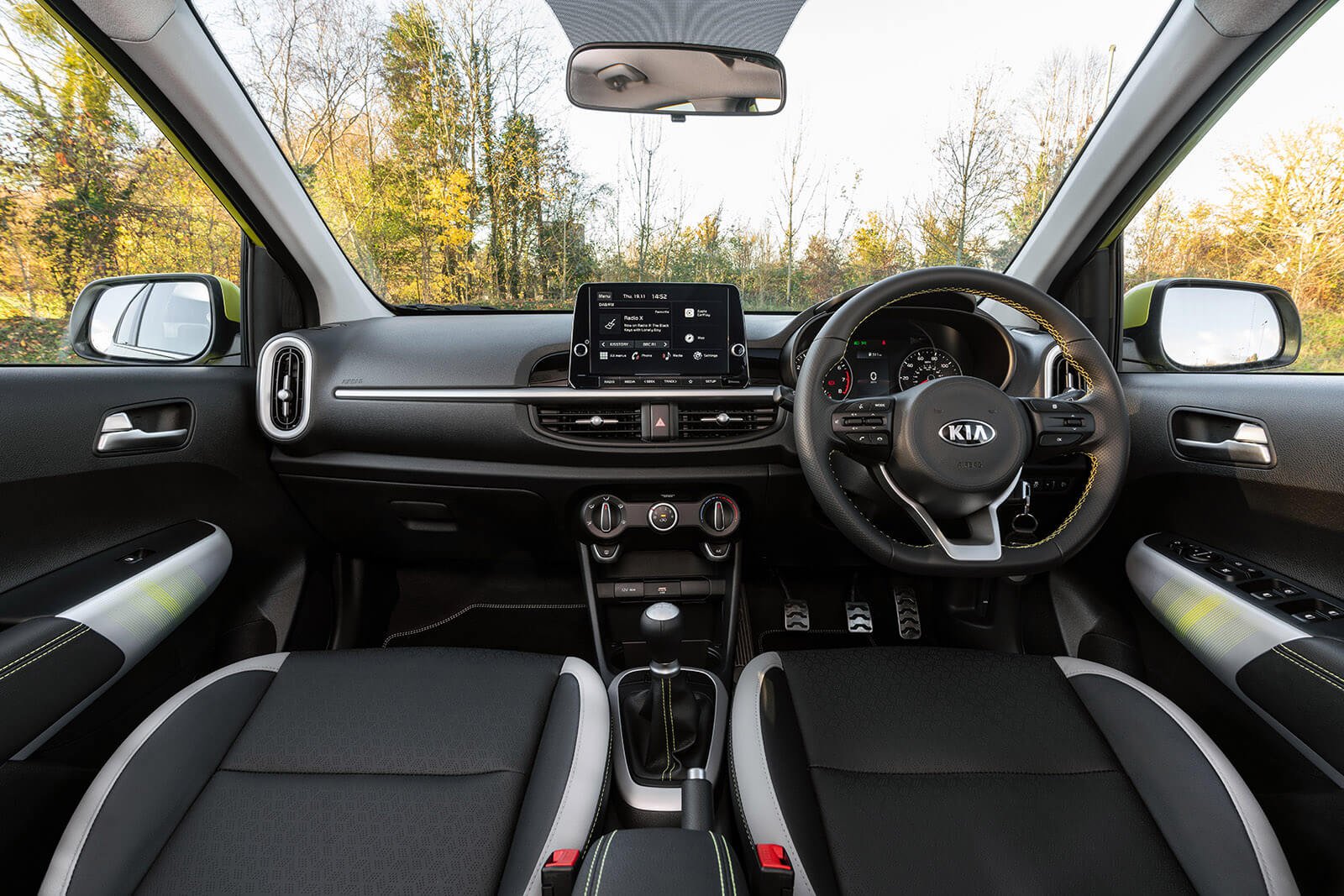 With '1' and '2' trims you get only an AM/FM radio, Bluetooth and a tiny, 3.8in monochrome screen, although that's better than the entry-level Sandero's system, which doesn't have a stereo.

Fortunately, the higher trim levels get a much more modern 8.0in colour touchscreen that adds a DAB radio plus Apple CarPlay and Android Auto smartphone mirroring. On 3, X-Line S and GT-Line S models, this also includes in-built sat-nav. And it's not a chore to use, because the menus are intuitive and the screen responds quickly to inputs – it's far better than the Up's system and one of the best in the class.

Range-topping X-Line S and GT-Line S models add wireless phone charging, but sadly those trims are bloomin' pricey. '1' trim gets just two stereo speakers, '2' trim has four, and everything else has six speakers as standard.

Like every other car in its price bracket, the Picanto's interior isn't graced with soft-touch materials that are a great joy to behold. However, the plastics have been textured in such a way that they don't look or feel too cheap. Everything seems well bolted together, too, giving the same feeling of solidity that you get from an i10.

As with the i10, the buttons and switches also feel nicely damped, but the i10 does have nicer leather on its steering wheel and plusher gloss-black plastics that knock it up a notch – for perceived quality at least.