Even tall adults will be spared any space issues in the front of the 3; there's plenty of leg and shoulder room, plus a generous amount of head room, thanks to seats that allow you to sit nice and low.

There's a good assortment of storage areas, too, including bottle holders in both doors, a rubber-coated non-slip area ahead of the gearlever and a reasonably deep glovebox that has enough room for the owner's manual and a small bottle. Oh yes, and a sizeable cubby under the front centre armrest.

This is an area of weakness for the Mazda 3. The best cars in the class, which include the Skoda Scala and Octavia, as well as the Ford Focus, allow six-footers space even if the front seats are slid well back. In the 3, anyone tall will find their knees are in close proximity to the front seat and head brushing the roof. It's tight for three adults across the rear bench, too.

Even if you’re smaller it's not great. The acutely upswept rear windows make it one of the more claustrophobic cars in this class, and even getting in and out through its comparatively small door apertures isn't as easy as it could be. 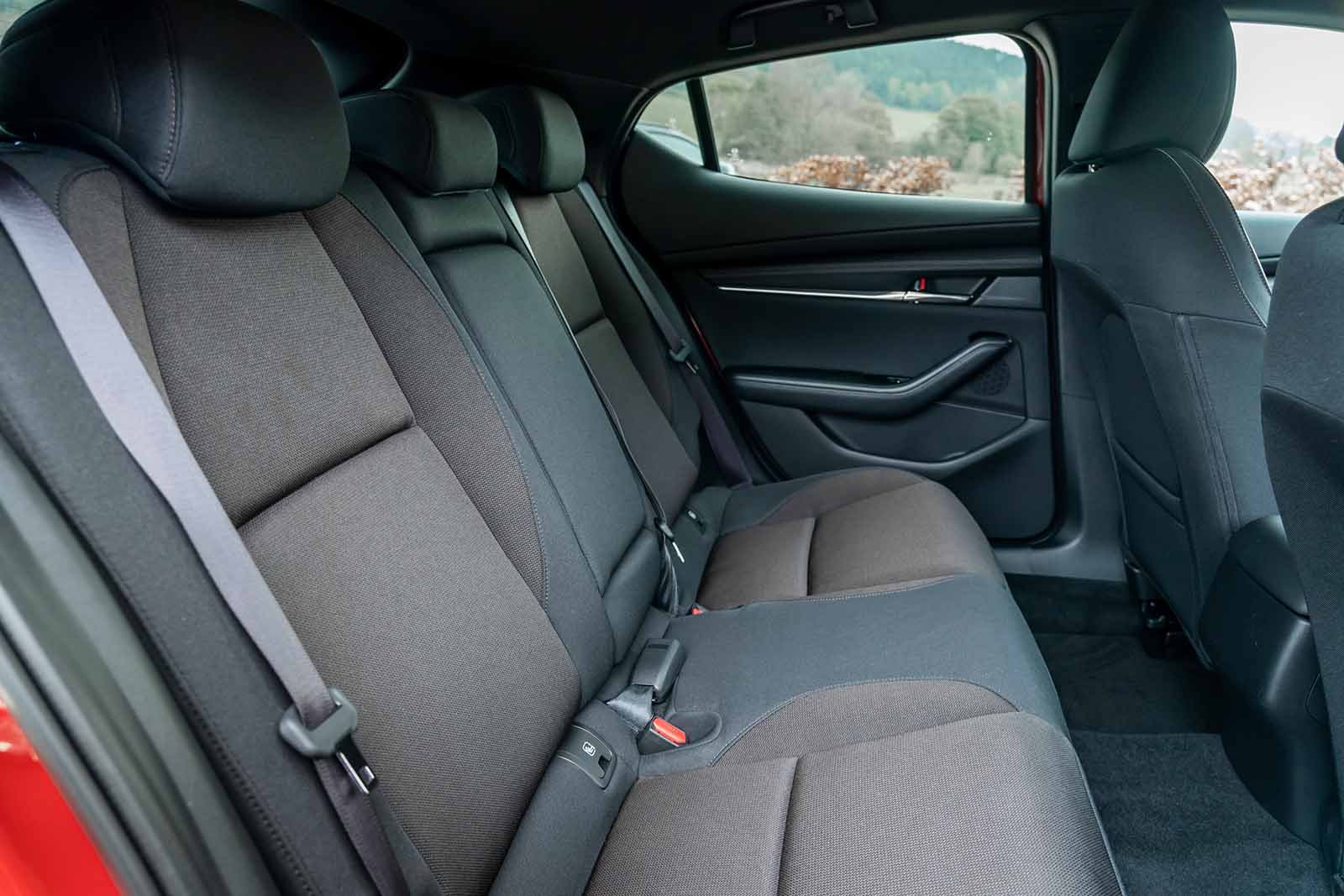 There isn't much to talk about here. As with moat rivals, the rear seatbacks can split 60/40 and they lie flat when folded down. However, you can’t access the release levers to lower the seatbacks without opening the side doors. Boot-mounted release levers, like those you can add to the Skoda Octavia, would be more convenient.

There’s no option of a fully folding front passenger seatback, either, for when you want to fit exceptionally long items on board. The passenger seat does feature height adjustment on all models, though.

Although it's not especially adaptable, the Mazda 3 isn't bad for boot space. The 3's boot is a usefully square shape that helps it accommodate a solid tally of six carry-on suitcases. That's one more than the Ford Focus and Volkswagen Golf can manage, although the Skoda Scala will manage seven and the Skoda Octavia eleven.

It's not the easiest luggage compartment to access, though. You're likely to find the 3's very high load lip an issue if you're lifting heavy items in and out, and loading aperture is relatively narrow. Unlike many of its rivals, the 3 doesn't offer a height-adjustable boot floor, either. The Mazda 3 Saloon offers more boot space, but at the expense of a smaller and more awkward boot opening.