Mazda doesn't use turbochargers to boost the performance of its petrol engines, which makes it almost unique among car manufacturers. That means that while the 163bhp 2.0 Skyactiv-G 165 has a larger capacity and more power than, say, the Citroën C5 Aircross 1.2 Puretech 130, it's no quicker.

It's a lot less flexible from low revs, too, so you have to get to 3000rpm and beyond to release its performance, making it harder work to drive because you're changing gears more often. It's still our favourite engine in the CX-5 range, though. The 191bhp 2.5 Skyactiv-G 194 is only a little bit faster and uses a lot more fuel (we'll look at costs in greater detail later), although it does come with a responsive automatic gearbox as standard, sparing you the constant gear-changing.

Don’t ignore the entry-level 148bhp 2.2 Skyactiv-D 150 diesel either. It pulls harder than the petrols from around 1500rpm and revs out freely all the way to the red line (0-62mph takes 9.9sec). Again, the more expensive 182bhp 2.2 Skyactiv-D 184 is a bit stronger at the top of the rev range but there isn't a stark difference.

The relatively stiff suspension that helps the Mazda CX-5 handle fairly well (see below) doesn’t do much for its ride comfort, which is one of its weak points. It’s more jarring over sharp-edged bumps than many rivals, including the Citroën C5 Aircross, Honda CR-V and the Peugeot 5008, and never really settles as well on the motorway.

With that in mind, if you value comfort we'd suggest sticking with the smaller 17in alloy wheels (standard on SE-L trim) because the larger 19in alloys and lower-profile tyres fitted to the higher trims make the ride even worse. 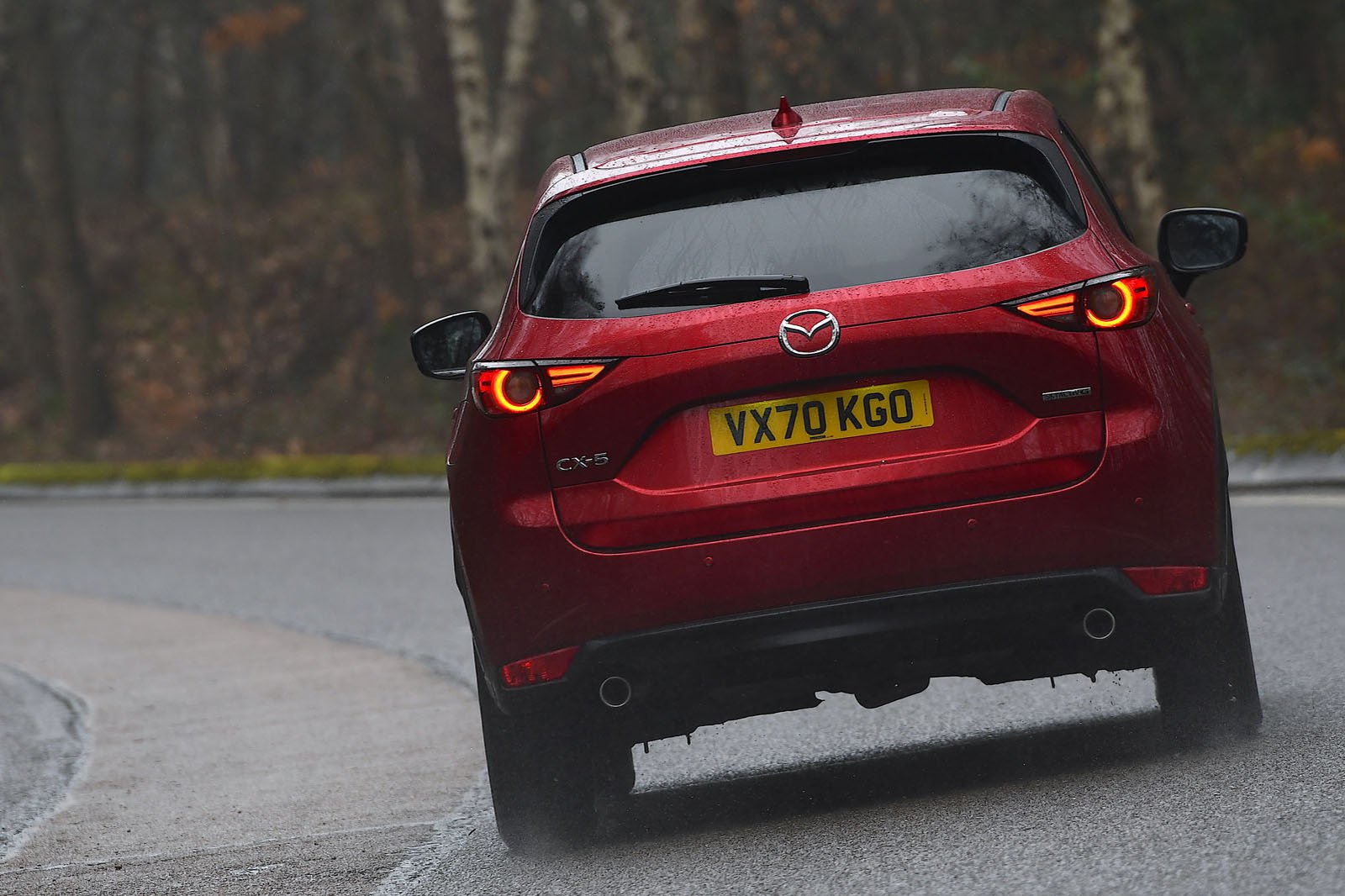 The Mazda CX-5 handles quite well compared with the Citroën C5 Aircross. It has a stiffer suspension set-up so it leans a lot less and its steering is more accurate, offering a greater degree of feedback. That said, it's no better than the Peugeot 5008, and, if handling is your top priority, the Seat Tarraco and Volkswagen Tiguan Allspace are even sharper to drive.

We mentioned that the larger 19in alloys hurt the CX-5's ride but they also improve its handling. The smaller 17in wheels have bigger tyre sidewalls and the extra rubber dulls your steering inputs.

There's a bit of road noise in a Mazda CX-5 fitted with the bigger 19in wheels – but that criticism also applies to many of its rivals, including the Honda CR-V and Toyota RAV4. The Peugeot 5008 and Skoda Kodiaq are quieter motorway cruisers.

The Mazda's diesel engines are smooth when worked hard but sound a bit gruff at very low revs. The fact that you need to work the petrol engine harder makes it an altogether rowdier companion.

The standard six-speed manual gearbox has a relatively precise and sporty action, while the optional automatic gearbox changes up and down smoothly on the move, and is not as jerky as a Kodiaq automatic when parking.