More for you |
Most and least reliable executive carsGeneva motor show 2020: all the star cars to watch out forOur best Target Price discountsComing soon: Audi A3 and Skoda OctaviaBest and worst hot hatches 2020
Home
News
Audi A3 concept car
news 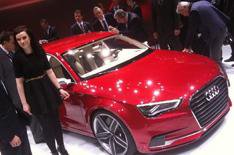 Audi's latest concept model is the A3 concept a saloon version of what will be the next A3 range.

Although it's based on the current RS3 Sportback, it looks like a slightly smaller version of the A4 saloon and comes with four-wheel drive.

The 2.5-litre engine is a tweaked version of the unit found in the TT RS and produces 402bhp and 369lb ft of torque, which is driven through a seven-speed S-tronic semi-auto gearbox.

There's room for four inside, and there's 410 litres of boot space available with the rear seats up. The swish white interior has a few useful gadgets in it, such as Google internet access (much like the system seen in the current Audi A8) and iPad users can put their tablet in the holder on the back of the front seats.

The next-generation A3 range is due out later this year, and the four-door model will be included in the line-up.