Audi A3 saloon to appear in the summer

* Saloon version of Audi A3 on sale before end of 2013 * First appearance in the summer * A3 Cabriolet to follow early next year... 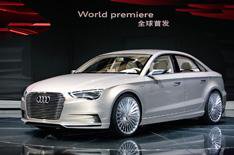 An Audi A3 saloon is due to go on sale in the UK before the end of 2013, after making its first public appearance in the summer.

Audi has confirmed that the new four-door A3 will likely appear at the Shanghai motor show in China in April.

China is expected to be one of the A3 saloon's biggest markets, along with the US.

This is the first time Audi has offered a four-door A3 in the UK, and the saloon is not expected to make a significant proportion of A3 sales here, but nonetheless it will give Audi a rival to the likes of the Mercedes CLA.

The new version of the A3 Cabriolet is set to follow shortly after the saloon, with sales due to start early in 2014. It is likely to make its first public appearance at the Frankfurt motor show in September.