More for you |
How to save money on your car insuranceShould I buy winter tyres?Audi A3 Sportback long-term test reviewWhat’s the best practical convertible car for me? A guide to short-term car insurance
Home
News
Audi A3
news 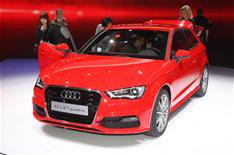 The new Audi A3 didnt exactly draw gasps of delight as it was revealed, but as people got to sit inside the new car and prod around its cabin, there were grudging looks of admiration.

While the A3 is a bit bigger, and features sharper looks particularly around its front end the big gains are in the cabin. Audis engineers have pulled some clever tricks, including ditching the handbrake lever (its an electronic switch now) and incorporating the infotainment systems touch-sensitive control in the top of the rotary dial.

The result is a cabin that feels more airy than before, and looks beautifully built. Indeed, the consensus was that the A3s cabin had the measure of the new Mercedes A-Classs for quality, if not creativity.

The cautious development approach extends to the engines 1.4- and 1.8-litre petrols at launch, along with a 2.0-litre diesel but wed expect the line-up to become more appealing, and interesting, within months of the cars launch. A little predictable, perhaps, but impressive with it.