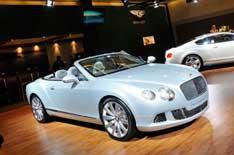 Bentley is showing off its new Continental GTC at the LA Auto Show.

The coupe received a range of updates last year, so now it's time for the open-top to get a similar treatment.

The twin-turbo 6.0-litre W12's power and flexibility have been upped a little and the standard six-speed automatic 'box has also been tinkered with for faster gearchanges.

It also gets the same suspension and steering changes to sharpen up the drive, and the four-wheel-drive system has also been improved to add to the effect. Weight has also dropped, making the GTC quicker and more fuel-efficient than its predecessor.

We've already driven the car and you can see our review here: Bentley Continental GTC review