More for you |
Most and least reliable family carsWhat to do if you put the wrong fuel in your carVolkswagen Passat GTE long-term test reviewNew issue of What Car? magazine on sale nowTrue MPG: most efficient SUVs
Home
News
Coupes & convertibles: Mercedes - Mini
news 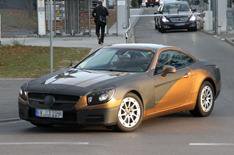 Mercedes SL
What is it? Lighter build should boost agility
Price from 65,000 (est)
On sale July

The sixth-generation Mercedes SL goes on sale in July.

Its longer and wider than the current SL, but has an all-aluminium body that makes it significantly lighter.

As with the current car, theres an electrically operated folding metal roof. It's available with a choice of a conventional painted finish or with a glass panel, however. Theres also the option of a glass roof with Magic Sky Control, which switches from light to dark at the touch of a button.

Full pricing and technical details are yet to be confirmed, but all versions are likely to be well equipped and wed expect a starting point of around 65,000.

Mini Paceman
What is it? Sportier, three-door version of Countryman
Price from 22,000 (est)
On sale Autumn

Minis new Paceman was unveiled in concept car form at the Detroit motor show in January 2011. The production version due in the third quarter of 2012 will be virtually unchanged.

Based on the Countryman, but with a three-door body, lower roofline and reshaped rear, the Paceman is likely to get the higher-output Mini engines and be offered with front- or four-wheel drive. Prices are still to be confirmed, but will probably start at around 22,000. With its coup-cum-SUV styling, the Paceman will be a natural rival to the Range Rover Evoque Coup.

Mini Roadster
What is it? Losing the rear seats sharpens open-air Minis style
Price from 18,015
On sale Spring

Minis two-seat drop-top looks much more grown-up than the Mini Convertible (which tries to retain usable rear seats, and fails).

The electric canvas roof takes just 10 seconds to open or close, and it fits in behind the rear seats, so the 240-litre boot space is unaffected.

The Roadster carries a premium of just over 1000 over the Mini Coup. That translates to a starting price of 18,015 for the regular Cooper, rising to 24,850 for the high-performance John Cooper Works edition. Theres also a diesel variant available, the Cooper SD, at 21,630.