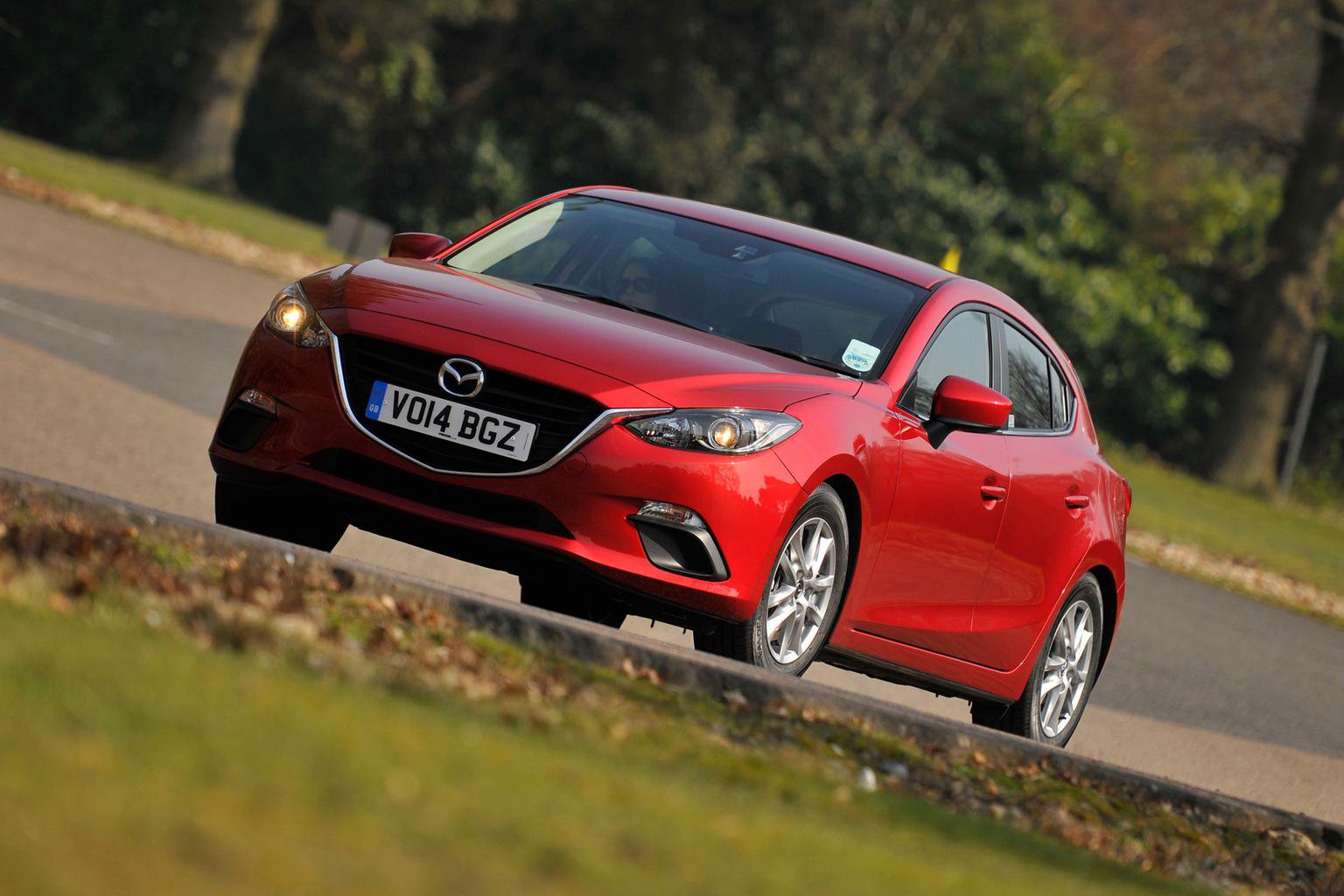 The Mazda 3 joined our fleet in March 2014 and has been put through its paces by us since then.

The car Mazda 3 2.0 120 SE Nav
Run by Nigel Donnelly, digital editor
Needs to offer a comfortable commute to work and cope with occasional longer journeys
Run by What Car? since March 2014
My rating

The Mazda 3 is the Japanese manufacturer's entrant in the ultra-competitive small family car market. Up against the sternest of competition such as the VW Golf and the Ford Focus, it's not an easy task to make an impression, but we are running a 2.0-litre petrol model for 12 months to see whether the Mazda deserves consideration among the class leaders.

Everyone is in unanimous agreement that the Mazda 3 is a great-looking car. Ours is in Soul Red, which based on our very unscientific research of looking at all the others we see on the road, seems to be a very popular choice.

The dashboard layout is simple, streamlined and well organised, reducing the need for any fumbling or unnecessary distraction. It's pretty easy to get comfortable too. The steering wheel position adjusts for reach and rake, which is great, but even if you get it wrong your view of the centre console and speedo is never compromised.

There is good, manually-operated adjustment on the driver's seat, including height and lumbar support, although the backrest adjustment is done with a sprung-lever, rather than a wheel. Not a deal breaker, but if you alternate with a partner or other co-driver, getting comfy can be quite a physical job.

Outward visibility is, on the whole, spot on, with big, well-angled door mirrors allowing you to see around the car.

What Car?'s road testers feel the Mazda lacks the sharp steering of the best cars in class, but I have few complaints about the 3’s road manners. It is an easy car to drive, with light controls.

The infotainment system takes a little working out, too. The various options for syncing the car with my smartphone and the built-in Aha and Stitcher music and social media apps all takes some getting used to, but they all work very well once you get to grips with them.

The system is controlled using a rotary controller between the seats. It has a ‘back’ button and a ‘home’ button, which makes owners of Android mobile phones or tablets feel immediately at home, and the basics of operation are pretty self-explanatory. The 7.0-inch screen accepts touch inputs, too.

What has really struck me is just how smooth the ride is. The 3 copes well with the pockmarked roads of southwest London - It doesn't quite glide over tarnished Tarmac, but it makes a fair stab of smoothing out all but the biggest kerbside crags. Other members of the team have wrinkled their noses at the 3's firm ride, but that doesn't really bother me. It is firm, but it is not uncomfortable and helps makes it a fun thing to drive.

The low-down torque of the 2.2-litre diesel makes for more relaxed progress, but there’s no denying the 2.0 petrol is far more refined. Road noise is a bit intrusive on anything but the most densely packed surfaces, though, and my colleagues are in agreement on this. Low-speed refinement is much better.

A helpful feature for town driving is the start-stop ‘i-stop’ system in the Mazda. Perhaps the biggest compliment I can give it is the fact that it’s hardly noticeable at all. There is no sudden shudder when the engine shuts off, nor is there any lag when engaging the clutch to move. It’s all very seamless and efficient.

What’s missing from the Mazda 3?

We opted for our car in SE Nav trim which offers a pretty generous specification, although there are a few holes. As the name implies, it has navigation, as well as other comfort options such as keyless ignition and voice control. The only option box we ticked was for the metallic paint.

One area I think Mazda can improve on is the 3’s interior. It is well put together, but rivals feel higher quality and less drab inside. That said, a year of clambering in and out through the best and worst of British weather has left it unmarked so it looks like it will wear pretty well.

The Mazda has had its fair share of practical tasks thrown at it and it’s taken them all in its stride. Perhaps the most impressive feat was taking two bikes and three passengers down to Brighton, and it also managed the same number of passengers with a six-foot Christmas tree in the back. There’s no doubting its suitability as a family hatchback.

The Mazda’s split-folding rear seats help this; folding them is easy enough and they go flat, but when you remove the cardboard-like parcel shelf is to feel as though you are threatening its very existence – especially the hinge clips that locate the shelf inside the car.

Some form of load control in the boot area would be nice too, as each trip to the supermarket results in us repacking the contents of our bags as they have emptied themselves on the journey home. A couple of hooks and some means of stopping things sliding around would be very handy indeed.

The 3’s lop-sided specification is a little frustrating.

Everyone who drives the 3 bemoans the lack of rear parking sensors or camera. Rear vision is not desperately good, you can’t add either as an option, and they don’t become standard until you get to SE-L trim level, which adds an extra £840 to the price for our 2.0-litre engine choice.

It has a large touch-screen sat-nav, which is excellent. It syncs with my iPhone to allow me to listen to audio content using the Stitcher and Aha apps, has voice control and keyless ignition. None of which I am bothered about as it happens. Providing keyless ignition without keyless entry seems to be the worst of both worlds. You need the key in your hand to unlock it, but when you get in the car, there is nowhere to put it. A needless niggle.

Equally frustrating, because it isn’t even an optional extra on our car you need to hop up to the SE-L trim level, adding a load of other stuff I don’t want, such as cruise control, xenon lights and rain-sensing wipers in order to get them. That means the cheapest Mazda 3 with reversing sensors – audible beeping only, not a reversing camera – will set you back more than £19,000, an extra £1500 to jump.

That would also add cruise control, which I don't miss very often, but on my frequent motorway miles in the Mazda and I do find the absence of cruise control, particularly in the average speed sections of the northern M25, a little frustrating.

We had a chance to drive the smaller 1.5-litre engine in the Mazda 3 and perhaps the biggest surprise is that it’s no more economical and no cleaner than the bigger-engined car. Both emit 119g/km of CO2 and have identical claimed economy figures. A bigger surprise than that, however, is that the price difference between the two models is just £300. With all that in mind, the 2.0-litre car looks the bigger bargain.

Mazda's SkyActiv technology seeks to reduce the weight of the car while making the engines as clean and efficient as possible and we have been satisfied with the economy we've had during our time with it.

Whether in town, on a-roads or bashing up and down the motorway, the 3's fuel economy on the trip computer stayed nailed at just over 40mpg. That's pretty respectable for a mid-size family hatchback with a 2.0-litre normally aspirated petrol engine. The diesel would likely achieve more, but with more expensive fuel and a higher list price, you'd need to ensure the maths added up. Over the course of our 10,000 mile test, it wouldn't even come close. The petrol was the right choice.

The Mazda 3 has given us no trouble at all. It has had one service at our local dealer, MKG3000 who asked if we had any trouble. After 10,000 miles, they gave it a thorough look over and they couldn't find anything to worry about either, so after a clean, a gallon of fresh Magnatec and an oil filter, the £195 changed hands and we were on our way.

While there have been no faults, there are a few niggles. Road and wind noise are a feature of motorway journies, with the former in particular being very noticable on the Mazda's regular tramp around the western extreme of the M25. Our car rides on Toyo tyres and it could well be that a swap to something else could make a difference.

We've also had some trouble with persistent tyre warnings. An orange spanner warning light on the dashboard popped up to tell me that it wanted me to swap the tyres around. A quick dig through the owner's manual showed that the warning can be turned off by cycling through the on-board computer’s various menus.

The tyre rotation light vanished only to be replaced by a ‘check tyre pressure’ warning light. After checking them, I found the front tyres were fractionally low on pressure, so I gave them a top up and went on my way. The warning light doesn’t turn off automatically though; you have to remove it yourself by holding and pressing the ‘set’ button with the tyre pressure symbol on it. It's easy enough to do, but it's rather annoying that it has to be done manually.

For: Looks great, easy to live with and great infotainment set-up
Against: Road noise, disjointed specification and poor rear visibility