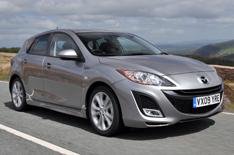 A while ago Mazda decided to make their cars look more Japanese a bold move when virtually all other Far Eastern car makers were desperately trying to give their cars a more European flavour.

The result has been a range of refreshingly styled cars that are among the most striking on the road, while still offering buyers the value and reliability you'd expect from a Mazda.

The latest Mazda 3 looks fantastic we'd even go as far as describing it as sexy, and that's a rarity in this class. On looks alone, it's a winner. It's not bad in every other respect, either. Inside, there's a good, if not class-leading, amount of space. The boot's a bit shallow and getting your feet into the rear footwell is a bit difficult if the driver's tall, but it will be fine for kids.

Quality is pretty good, although the design of the dash isn't quite as harmonious as the outside it's a mind-bending mix of circles, curves and straight lines that looks like it has been designed by three different people. Wearing blindfolds.

True to Mazda's usual approach, though, kit levels are good for the money. There's air-con on the most basic cars and climate control on everything else, with six airbags and stability control on all. The prices are keen compared with those of increasingly expensive European small family cars, too.

As well as the new design philosophy, all new Mazdas are going on a crash diet to reduce weight weight being the enemy as far as emissions and economy is concerned. As a result, fuel consumption and CO2 emissions are better than before not scintillatingly so, but the figures are there or thereabouts with rivals. Our favourite engine, the 1.6-litre diesel, slides neatly under the 120g/km CO2 barrier (119g/km to be precise) and averages 62.8mpg.

The engine's smooth, punchy and a real joy to drive. The handling is as good as the engine, too. There's plenty of grip, the steering is responsive (if a little short on feel), and the body won't lean if you take a corner quickly.

According to Mazda, the biggest-selling engine will be the 1.6-litre petrol. We recommend that you don't even bother with a test drive it's gutless and about as much fun as a cold bath. At the other end of the scale is the hot 2.2-litre diesel: it's a hoot, yet promises 50mpg. It's pricey at just under £20,000, but if you fancy some economical fun, it could well give the hot 3 MPS (which arrives later this year)
a run for its money.

Our verdict
Fun, funky and great value. Avoid the 1.6 petrol