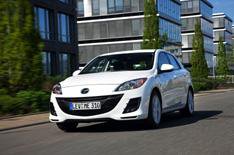 First, the good news Mazda has developed a new engine stop-start system to improve economy and emissions on the new Mazda 3.

Like any stop-start system, i-Stop cuts the engine when you come to a standstill, and restarts it automatically when you press the clutch pedal.

However, i-Stop works in a different way to other systems (we won't bore you with the details), which makes restarts smoother, quieter and quicker. Brilliant.

There's some not-so-good news, though. The system works only on engines with direct injection, and there's just one engine in the current Mazda 3 line-up that fits the bill - the 149bhp 2.0-litre petrol.

That means CO2 emissions of 159g/km and average fuel consumption of 41.5mpg, so it's not exactly a green car. That said, these figures aren't bad for a car with warm-hatch performance, and this 3 is enjoyable to drive, if not particularly comfortable.

It'll be a while before the 3's smaller petrol and diesel powerplants become compatible with i-Stop, because we have to wait for Mazda's new generation of direct injection engines. Until that happens, stick with the diesel.

Overall verdict Good stop-start system, but wait until it's available on a more sensible engine