Mazda CX-5 due in March 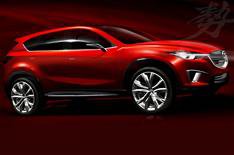 The order book for Mazda's new CX-5 crossover will open in September, with the first customers getting their cars in March next year.

The forthcoming VW Tiguan and Ford Kuga rival is being readied for its public debut at the Frankfurt motor show on September 13, and Mazda has revealed it will be taking pre-orders via a special website after the unveiling.

Prices are expected to start at around 21,000, and Mazda will offer to refund deposits to customers who aren't completely satisfied after a test drive.

The new CX-5 - which will be based on the Minagi concept (pictured) - will also be the first Mazda to get the company's new ultra-efficient Skyactiv engines and gearboxes.

As a result, the manual 2.2-litre diesel version will emit less than 120g/km of CO2 and average around 65mpg, making it one of the most efficient cars in its class, claims Mazda.

Mazda Motors UK managing director Jeremy Thomson said: 'We've never made special eco versions of our cars; we don't believe in it. Every CX-5 customer will get our Skyactiv drivetrains as standard, in much in the same way as every BMW customer gets Efficient Dynamics fuel-saving modifications.'