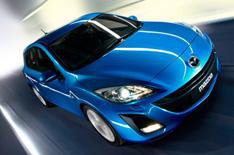 Mazda has revealed a new five-door hatchback at the Bologna Motor Show.

The new car is around 15 kilos lighter than its predecessor, with CO2 emissions cut by up to 13g/km.

Yet the new 3 is slightly bigger, more luxurious and more sophisticated than the outgoing car.

Technical add-ons include the option of blind-spot monitoring for the first time in any mid-sized family hatch, and swivelling bi-xenon front lamps.

Mazda's 'Airflow management', which smooths and channels the passage of air around and through the car, along with the introduction of part-electric power steering has contributed towards the reduced fuel consumption and improved CO2 figures.

The design
Mazda's design team has gone for a more aggressive exterior with a smarter, more expensive-looking interior.

The front third of the car echoes that of the four-door model introduced at Los Angeles a couple of weeks ago. At the rear, the new 3 has heavier window pillars, a rooftop spoiler and a stronger bumper to show that green measures need not be at the expense of sporty styling.

Hatchback and saloon versions go on sale in the UK next spring, and prices aren't expected to rise over the current car's.