* Latest from Los Angeles Auto Show * What Car? reporting live from the show * Latest news as it happens... 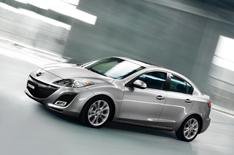 It's a range that accounts for a third of Mazda's worldwide sales, so the company is anxious to let all markets in on the act as quickly as possible.

The car at LA is the four-door saloon primarily for America, the Far East and Russia, but the European five-door hatch will appear at the Bologna show in less than a fortnight. The three-door version is scheduled to break cover at Geneva in March.

Mazda says it follows the philosophy of its other recent introductions. It is larger but lighter and more fuel-efficient and adopts Japanese-influenced styling with a sporty twist rather than trying to ape European rivals.

'We wanted the kind of car that would allow us to fool ourselves for a moment that we had a sports car in the garage,' says design general manager Laurens Van Der Acker.

There's a low main front air opening with smaller grilles around it and lamp units with a high-tech look. Adaptive lights that move with the steering will be available.

Inside, Van Der Acker has gone for a look of 'unparalleled quality and craftsmanship that makes you think you are getting more for less'. Dual-zone climate control, eight-way seating adjustment and push-button starting are among the features that will be offered.

The European engine line-up will include 1.6, 2.0 and 2.5-litre petrols and 1.6 and 2.2-litre diesels. Three- and five-door versions are due for simultaneous introduction in March.