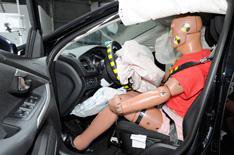 Britain got its second Euro NCAP-approved testing laboratory yesterday, when Thatcham Research was given official accreditation by the European vehicle safety body.

The approval means the results of Thatcham's tests will directly influence the safety ratings of the cars it handles.

Thatcham chief Peter Shaw said: 'Our work with Euro NCAP is an important step forward and takes Thatchams engagement with the automotive industry to a new level that will benefit car manufacturers, technology suppliers and, ultimately, vehicle owners and their insurers.'

Thatcham has been a member of Euro NCAP since 2004, contributing seat- and head restraint design knowledge to reduce whiplash injuries and provide a rating system for electronic stability control systems.

More recently, the centre devised tests and a rating system for automated braking systems, making it the lead research institute in Europe on such technology.

The centre will now carry out controlled collision tests including a frontal crash at 40mph; a 30mph side crash into a moving barrier; and a 19mph impact into a static pole.

Figures reveal that 60% of fatalities are caused by frontal crashes, while 25% are a result of a side impact making protection systems such as curtain airbags vital life-saving technologies.

Play the video, below, to see the Volvo V40 going through collision testing

Speaking at the event, transport minister Stephen Hammond praised Thatcham for its work in helping to make the UKs roads the safest in Europe.

He said: 'Thatchams objectives are aligned with the Department for Transport's own vision that transport should provide for economic growth but should also be the safest it is possible to be.'

He added: 'Britain's roads are the safest in Europe, but nevertheless there were 1901 fatalities in 2011 and 23,000 people seriously injured, and, on top of the terrible cost to families and society, the economic cost is 15.5 billion.

'Crash-avoidance technology can help to reduce that cost; it will change the way we drive, and we want to see and do all we can to promote it and ensure these products are recognised by car buyers.'

Crash-avoidance systems will become part of Euro NCAP's safety ratings from 2014, while pedestrian-avoidance technology research is to get 2 million in funding over the next three years.

However, Mr Hammond told What Car? that while the Government hasnt ruled out making crash avoidance technology mandatory in new cars, it has no plans to introduce regulation.

Of course we want to see more manufacturers fitting this system to their new models, but we think this will be driven by the market and safety ratings without the Governments interference, he said.