* Will it tempt you? * New crossover from Nissan * Inspired by scuba diving... 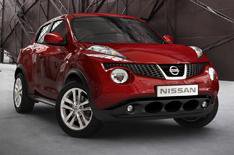 This is the new Juke a supermini-sized crossover which Nissan hopes will tempt buyers away from more traditional hatchback options.

It's almost impossible to talk about the Juke without mentioning the Qashqai as well. Both aim to give buyers a change from the norm and attract new customers to the brand.

The Qashqai has done this very well. With more than half a million sales in Europe since spring 2007, it's been far more successful than a straight small family car replacement for the Almera is likely to have fared.

The Juke will be built alongside the Qashqai in Sunderland, and will go on sale in the second half of the year. It's being pitched as a Mini rival, so expect prices to range from around 13,000, going up to 20,000.

The basics
Measuring 4135mm from tip to tail, the Juke is 200mm shorter than the Qashqai. It occupies the same amount of road space as a Peugeot 207, although it's 70mm taller.

The five-door, five-seater Juke has a decent 251-litre boot that expands to 550 litres when the 60/40 rear seats are folded down.

All but one model will be front-wheel drive. The entry-level petrol is a 115bhp 1.6-litre, which is mated with either a five-speed manual gearbox, or a continuously variable automatic transmission (CVT).

The one diesel in the range a 108bhp 1.5-litre uses a six-speed manual gearbox, which will also be available with the range-topping turbocharged petrol unit.

It's this 187bhp petrol engine that can be had with four-wheel drive and a CVT auto with six-speed manual override. As well as sending up to 50% of engine torque to the rear wheels, the 'All-Mode 4x4 with Torque Vectoring' system can divide it between the left- and right-hand wheels.

Final figures for all of the engines including 0-60mph, top speed, fuel consumption and emissions are yet to be confirmed.

Nissan's Visia, Accenta and Tekna trims will be on hand, with all models expected to get air-conditioning, alloy wheels and plenty of airbags.

The looks
Although the wheelarches are a little less extreme than the Qazana concept car, they're still prominent on the production car. Along with the high waistline (where the windows start), this gives the Juke a solid, robust look, while the sloping roofline and hidden rear door handles give it a sporty coupe-like feel.

The twin headlights are also a striking feature (click here to see the headlamps) that's been carried over from the Qazana concept car, while the feline-shaped daytime running lights on the bonnet give the car a dash of added pizzazz.

Are you for scuba?
The cabin follows the sporty theme of the exterior and draws inspiration from the world of scuba diving and quad biking.

Look closely at the grab handle on the front doors and you'll see the shape of a diver's flipper picked out by the colour-contrasting fabrics.

Storage trays also use the same kind of material that you might find in a wetsuit to stop your coins and mobile phones rolling around, while the centre console takes on shape of a quad bike's fuel tank.

It's all designed to say get up and go, and works pretty well we think.

Are you for the Juke?
Nissan reckons 80% of Juke buyers will be new to the brand, so it's an important car for increasing Nissan's market share.

The company also predicts most of the customers will be men: 63% to be precise, while 63% will also be between 20 and 39-years old. A third will be pre-family, 65% will be transferring from superminis and 31% will come from small family cars such as the Ford Focus.