* Top scrappage models listed * All the information you need * Are you entitled to the cash?... 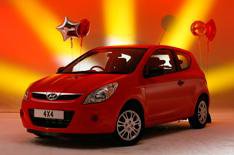 How do they do it? Somehow the number-crunchers at Hyundai have worked out that they can sell this spacious, safe and well-equipped supermini for less than 7000 and still turn a profit. Factor in the Government's 1000 contribution and it'll cost youless than 6k to buy.

You could pick up a car for up to 1500 less under the scrappage scheme, but the i20 is a full-size supermini, rather than just a tiny city car. It has a much bigger boot than its little brother, the i10, and more room in the back. What's more, with a five-star Euro NCAP crash test rating and a low CO2 output, it'll almost certainly be safer and greener than the car you're thinking of scrapping.

It may not be quite as polished as the class-leading Ford Fiesta and Vauxhall Corsa, but it isn't far behind, and it's a lot cheaper to buy. You also get a five-year, unlimited-mileage warranty.

So, if you're in two minds about taking advantage of scheme and want something cheap, fair to drive and with a reasonable amount of space, the i20 gets our nod as Britain's best scrappage buy.