More for you |
Most and least reliable family carsWhat to do if you put the wrong fuel in your carVolkswagen Passat GTE long-term test reviewNew issue of What Car? magazine on sale nowTrue MPG: most efficient SUVs
Home
News
whatcar.com readers' award
news 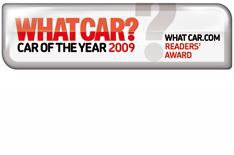 whatcar.com readers' award
We asked you, the whatcar.com users, what you considered to be the most exciting car that's due to be launched in 2009.

The vote was extremely close, with the Honda Insight narrowly missing out on the top spot, but there can be just one winner.

The winner is...
VW Golf GTI is the Most Exciting Car of 2009
Narrowly beats Honda Insight
Voted by whatcar.com readers

The Volkswagen Golf GTI has won this year's What Car? Reader Award as the most exciting car being launched in 2009.

The car is expected to go on sale this Autumn, powered by a 207bhp 2.0-litre petrol engine. Exact performance figures haven't been released, but it should travel from 0-62mph in around seven seconds.

Readers of whatcar.com and its sister website evecars.com voted for the car, having chosen it from a shortlist of 10 new cars that will launch this year.

In announcing the What Car? Reader Award, Steve Fowler, Group Editor of What Car?, said: 'The Golf GTI name resonates with all car enthusiasts and it's clear the new model has already struck a chord with whatcar.com and evecars.com users.

'It was an extremely close battle between the Golf GTI and the Honda Insight, which underlines how exciting 2009's numerous car launches will be. Manufacturers are producing enticing products for every type of car buyer at the moment.'

Chris Craft, Director of Volkswagen UK, said: 'I am very excited about the award for the new GTI. Any honour which is voted for by the car-buying public is particularly important to us in gauging reaction to our vehicles.'

You can watch What Car?'s Reader Test Team taking a look around the VW Golf GTI at What Car? TV: Volkswagen Golf GTI