If you’ve ever driven an original Nissan Juke (‘10-19), you might well have been frustrated by the fact that its steering wheel only adjusted for height and not reach.

That was a real bugbear for some drivers, so you’ll be pleased to hear that the steering wheel of the current Juke moves both in and out. Combined with well-positioned pedals, this makes it easy to get comfortable behind the wheel. You might not stay that way on longer journeys, though, because there's no adjustable lumbar support to prevent you slouching. A few of our testers have had cause to complain about this, so we'd suggest an extended test drive to see what you think.

If the reason you’re considering a small SUV is that you like a lofty driving position, it’s worth noting that you feel a bit higher up when sitting in a Juke than you do some of its rivals, including the Skoda Kamiq.

All versions get LED headlights, and the view out of the front and diagonally out of junctions is actually quite good. That’s partly because you’re perched relatively high up, and also because the windscreen pillars are helpfully slender.

Less impressive is the view back over your shoulder, which is more obscured than rivals such as the Kamiq. The blame here lies with the Juke's chunky rear pillars and small rear screen, although you get a rear-view camera to help out with parking if you go for Acenta trim or above. Go for Tekna or Tekna+ trim and that camera is upgraded to a 360deg monitor, which gives you a bird’s eye view of the car to make manoeuvring in tight spaces even easier. 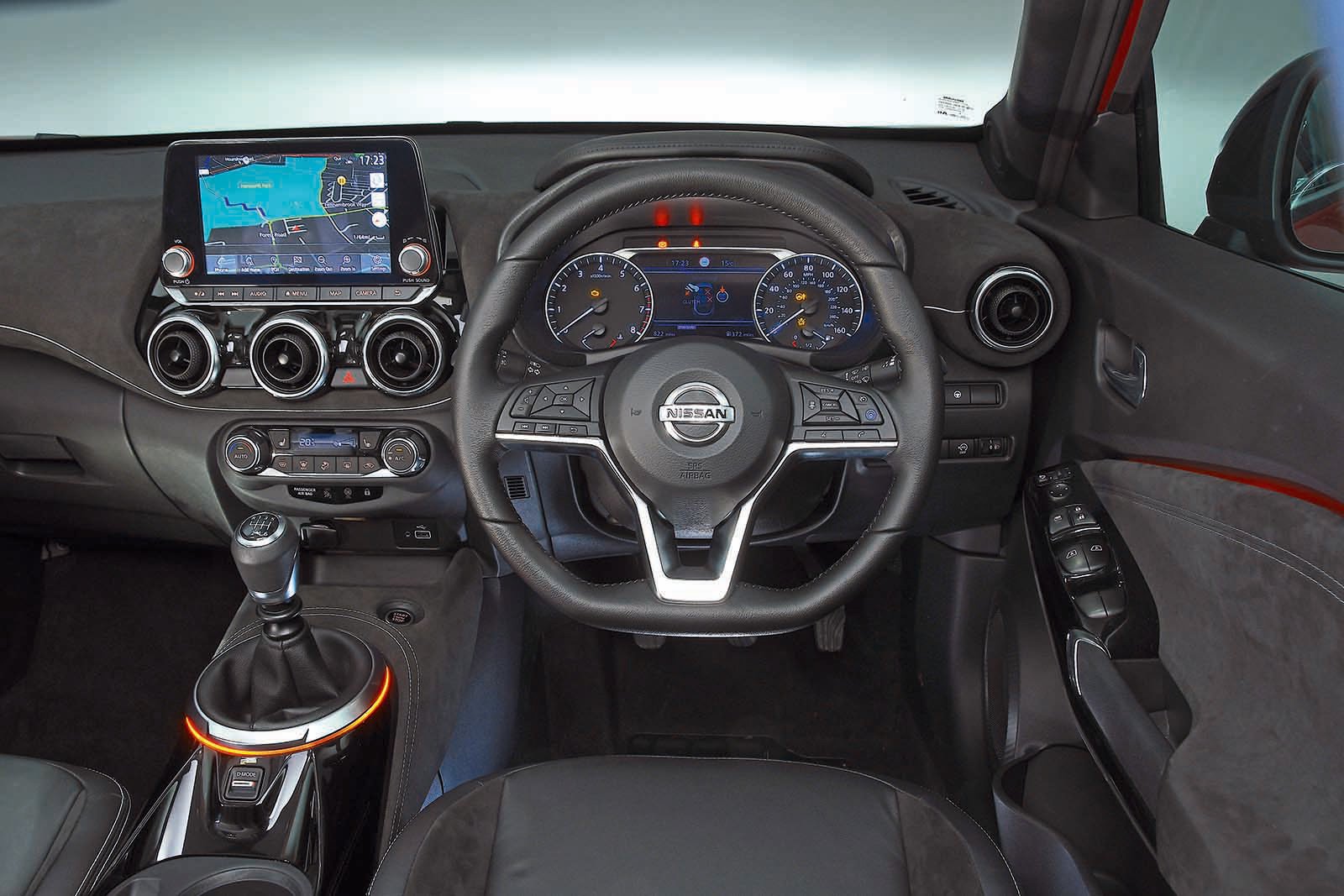 Entry-level Visia trim gets you a rudimentary infotainment system that looks like a throwback to the early noughties. However, despite its tiny monochrome screen, you get Bluetooth, a DAB radio and a USB socket. It's still best avoided, though.

Instead, we’d recommend upgrading at least to Acenta trim, because it gives you a much more modern 8.0in colour touchscreen. And you get more modern features, too, including Apple Carplay and Android Auto smartphone mirroring so you can use your phone's apps, such as Google Maps and Waze navigation. N-Connecta trim and above adds a built-in sat-nav with live traffic information.

The graphics on the touchscreen could be sharper and there’s often a delay between you touching the screen and anything happening. Some of the icons are also a little small to hit accurately on the move. That's why we prefer the ease of use and greater responsiveness of the Volkswagen T-Roc's system. On the plus side, the eight-speaker Bose sound system, which comes on Tekna and Tekna+ models, is very punchy by class standards.

This is one area in which the latest Juke has taken an enormous leap forwards compared with the original model.

True, it's the range-topping trims like Tekna+ – with fancier materials such as swathes of Alcantara and glossy black plastic – that look the best, but even the mid-level trims look and feel better than a T-Roc or Ford Puma inside.

The metal-look turbine-style air vents, for example, feel surprisingly upmarket and make a satisfying click when you close them off. In fact, it’s only the hard plastic on the tops of the doors that lets the side down a little. In terms of build quality and, on the whole, material plushness, the Juke is up there with the very best small SUVs, beaten only by premium rivals like the Audi Q2.