The driver's seat has enough lateral support to ensure you don’t slide about too much through corners, but while you might expect the Monte Carlo's sports seats to be noticeably more figure hugging, they aren't. All versions have a decent degree of lower back support, although there’s no lumbar adjustment to allow you to fine-tune this, even as an option.

You do get a height-adjustable driver's seat on all versions in addition to a height and reach-adjustable steering wheel. And the steering wheel, seat and pedals all line up nicely, so you shouldn't have too many problems getting comfy; we'd still say the Fiesta's extra range of adjustment allows for finer tuning of the driving position, though.

The Fabia's dashboard layout and big switches couldn't be simpler to get to grips with, and SE L trim adds a centre armrest as standard that's an option on the other trims.

The view out the front is very good thanks to narrow windscreen pillars, and it’s the same story when looking back and over your shoulder. By today's standards, the Fabia's rear pillars are slim and cause little obstruction, whereas most of its rivals feature thicker pillars and a smaller glass area, making them more difficult to reverse.

Entry-level S trim goes without parking sensors, although these are available as an option. Rear parking sensors become standard from SE trim, but you still have to pay extra for front sensors or a rear-view camera on all trims.

LED daytime running lights are standard, while full LED headlights are a pricey option from SE trim. These are quite a bit brighter than the standard halogen bulbs, though. 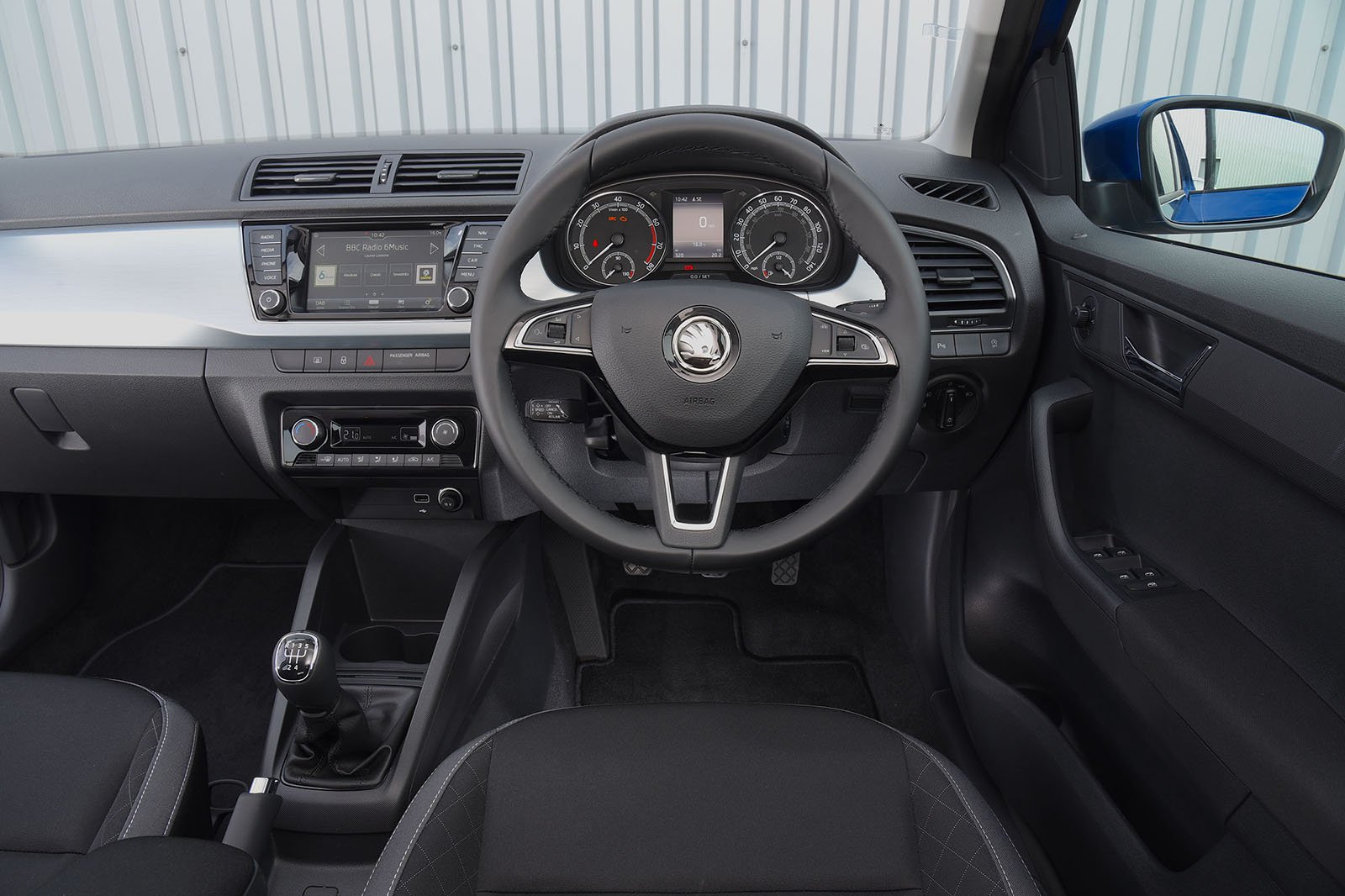 Every Fabia has a 6.5in colour touchscreen in the centre of the dashboard. That’s quite small by today's measures and its rivals’ screens, including the Fiesta’s, i20’s, Ibiza’s and Polo’s, have better graphics and clarity. It's responsive, though, with intuitive menus that don't take ages to figure out. And you get physical short-cut buttons around the outside of the screen, to hop easily from one function to another.

SE trim and above get a multi-function steering wheel with radio and phone controls, along with Apple CarPlay/ Android Auto smartphone mirroring. The latter feature allows you to use certain smartphone apps – such as Google Maps and Waze – through the infotainment screen. That means you don't need to worry about having in-built sat-nav, which is standard on SE Drive and SE L trims.

Even the S trim has a DAB radio, Bluetooth and a USB port, while SE trim adds more speakers (six) and a better surround-sound stereo.

Just as the Fabia is arguably unlikely to win any beauty contests for the way it looks on the outside, you probably won't be blown away by the styling inside, either. One thing’s for sure, though: its interior feels built to last and comes with buttons and switches that are as dependable as those in some of Skoda’s bigger cars.

What is undeniably lacking are soft-touch plastics or many fancy trims to add a bit of plushness. You will find evidence of those in some of its rivals, including the Ford Fiesta and Volkswagen Polo. The Monte Carlo has the most effort made to jazz up its interior with a dash of colour.