No matter what size or shape you are, the Golf Estate is built with driver comfort in mind. There's seat-height adjustment, lots of steering wheel rake and reach adjustment, and the moveable front centre armrest gives you something cushioning to lean on. Adjustable lumbar support is standard on all trims, but even so, the lower-back support provided by the seats fitted to entry-level Life trim didn't suit all our testers. The sports seats, fitted from Style trim and up, are much better and offer excellent side support through corners.

Look at the dashboard closely and you’ll see that all the buttons are touch-sensitive or have been loaded on to the infotainment touchscreen (you can read more about that in the section below). The only physical buttons are on the steering wheel, but even these are replaced with touch-sensitive buttons on the R-Line trim.

So what’s the problem with that? Well, touch-sensitive buttons are needlessly fiddly to use while driving compared with proper buttons and knobs, which you’ll find in the Ford Focus Estate and Kia Ceed SW. As a consequence, you’re taking your eyes off the road momentarily just to make simple changes, to the interior temperature for instance, in the Golf. At night the temperature controls don’t even light up, which, as the saying goes, leaves you stabbing in the dark.

With a big windscreen and large side windows, looking forwards or left and right at junctions is easy in the Golf. The position and rake of the windscreen pillars can cause you to crane your neck for a clear view at roundabouts, though. Being an estate there’s a lot more glass at the back than there is in the regular Golf hatchback and it’s fairly easy to reverse as a result. Front and rear parking sensors are standard on all trims and a rear-view camera is optional.

Powerful LED headlights are also standard. Mid-level Style trim adds LED 'Plus' headlights, which can direct their light around corners. IQ Matrix LED headlights are optional and the bee's knees; you can leave them on main beam without blinding other road users. 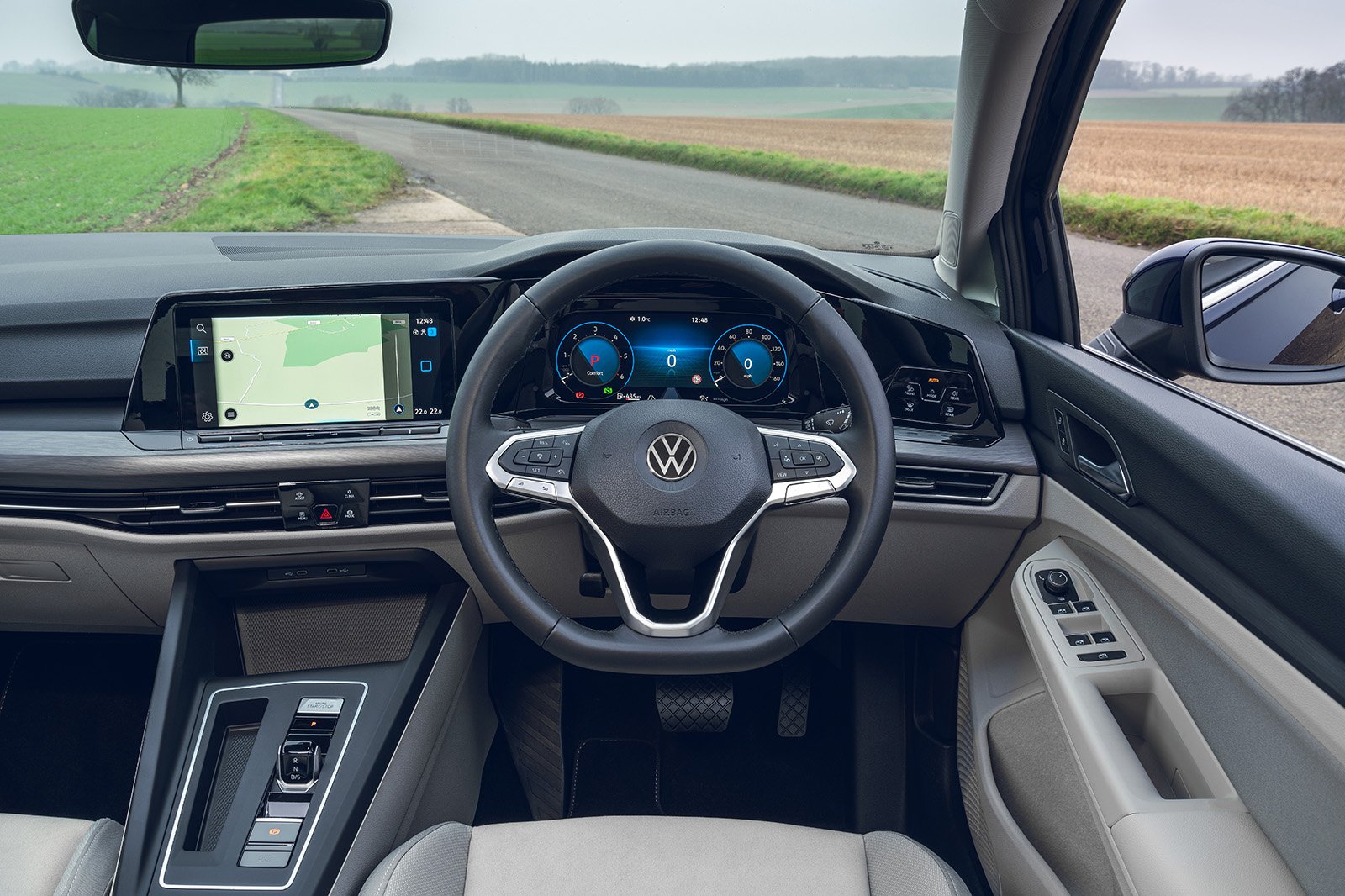 The Golf comes with a 10.0in touchscreen infotainment system. It's mounted high up, so you don’t have to look too far from the road to use it, the screen is sharp and there are lots of helpful standard features, including wireless phone charging, in-built sat-nav, Bluetooth, and Apple CarPlay/ Android Auto smartphone integration.

What a shame that the software developers concentrated on making it look swish rather than easy to use, though. The menus are confusingly arranged and, to make matters worse, there are no physical shortcut buttons to take you quickly from one feature to the next. On top of that, every version we've tried so far has been littered with software bugs, which even affect Apple CarPlay, so there's no way to escape the frustration. You can add Volkswagen’s natural speech voice control system – it can translate “my hands are cold”, for example, as a request to switch on the heated steering wheel (where fitted) – but it doesn't always work, especially if there are screaming kids in the car. It’s also ridiculously expensive for something that’s standard in most rivals.

The best infotainment in the class is the iDrive system that you get with the BMW 3 Series Touring and 5 Series Touring. But you don’t have to spend that much to improve on the Golf’s system: the Focus’s or Ceed SW’s infotainment system is pretty good. The Golf's standard six-speaker stereo sounds fine, with a nine-speaker Harman Kardon system optional on every trim.

Golfs (hatches and estates) are historically a paragon of build quality but this is less true of the current model. At first glance, everything looks smart: a clean and modern design with some soft-touch surfaces on the upper parts of the dashboard and front doors. There are other nice elements, too, such as the metal dashboard trims and carpeted door bins, which help prevent loose items from rattling around.

However, when it comes to feeling like a cut above, the Golf is only marginally better than the Seat Leon Estate inside and not quite as plush as the latest Skoda Octavia Estate. It is better than the Focus, though.