As befits such a big car, you won’t have issues fitting in the front, even if you’re very tall. The front seats slide back a long way to accommodate those especially long in the leg and there’s loads of head room, too.

Admittedly, the Land Rover Discovery Sport is bigger still, but Volvo’s penchant for light-coloured interiors gives the impression of there being even more space than there actually is.

As for stowage, there’s a deep bin beneath the centre armrest and a cubby by the gearlever with a sliding cover to keep valuables out of sight. The door pockets are easily big enough for a one-litre bottle of drink, too.  It’s worth noting, though, that plug-in hybrid models have shallower storage areas in the centre console and under the front armrest. This is due to the battery being housed in the middle of the car.

The XC60 is pretty roomy in the back, too. While a Land Rover Discovery Sport may offer an extra centimetre of space here and there, very tall folks will still appreciate how much knee room the Volvo offers, which is more than the Audi Q5. Head room is impressive, too, even if you add the optional panoramic glass roof. That's not always the case: the DS 7 Crossback feels very cramped with a sunroof added.

The XC60 is also broader inside than many of its key rivals; shoulder room for three adults sitting side by side is surprisingly good. However, whoever gets the middle seat will find the seat itself rather narrow and will also have to straddle the raised tunnel that runs along the floor.

All versions have five seats. If you want seven seats, you’ll need to upgrade to the XC60's larger sibling, the XC90 or go for the Discovery Sport or Kia Sorento. 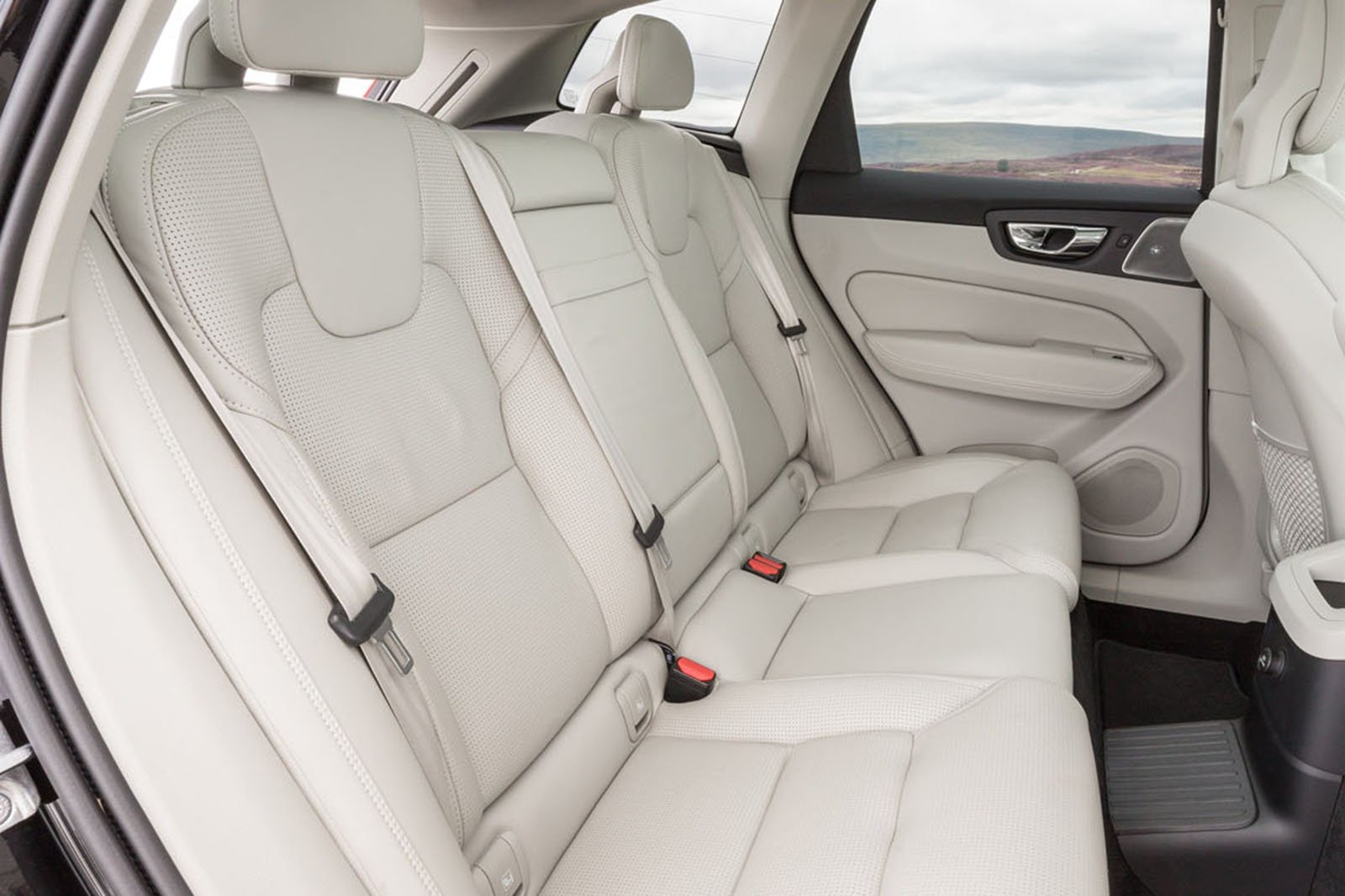 The XC60 has 60/40 split-folding rear seats as standard and you get a ski hatch for sliding in long items between two rear passengers. However, it’s a shame that the seatbacks aren’t split in a 40/20/40 layout, a more flexible configuration that's available in many of its rivals.

It’s also a pity that you can’t have sliding and reclining rear seats; again, this handy feature is standard on the Discovery Sport and optional on the Q5. That said, you can specify a pair of optional fold-out booster seats, which are built in to the outer rear seats and suitable for smaller kids.

This is another area in which the XC60 can’t quite match the class best but is by no means bad. Officially, there’s 483 litres of space to play with, which is about 10% less than you get in the Q5 or BMW X3, and the boot is quite shallow. Capacity is reduced a little further in the plug-in hybrid T6 and T8 model (468 litres), because most of the electrical gubbins sits under the boot floor, raising it by a few centimetres compared with non-hybrid versions of the XC60. However, the plug-in version of the X3, the xDrive 30e, loses a far bigger percentage of its boot space to its batteries and ends up with a smaller boot than the T6 or T8.

And actually, there's still enough space for most families’ needs in the XC60; we managed to slot eight carry-on suitcases below the parcel shelf (seven in the case of the T6 and T8), which is one more than a DS 7 Crossback swallowed. There’s no lip at the boot's entrance, either, and folding down the rear seatbacks leaves a completely flat extended load bay.

Not the cheapest seven-seat SUV, but hugely practical and&nbsp...