Whatever size and shape you are, it’s unlikely you’ll have a problem with the Q2’s driving position. The steering wheel has a good range of up-and-down (and in-and-out) movement, and every model has powered adjustable lumbar support as standard.

The seat, especially in Sport trim models and above, supports your thighs and shoulders nicely, helping you stay comfortable on a long journey.

And while the dashboard is essentially the same one used in the previous-generation Audi A3, that's no bad thing. It means the buttons and switches are clearly marked and positioned within easy reach, and you get 12.3in digital instrument dials (or a Virtual Cockpit in Audi speak) as standard from Sport trim upwards.

Even though the Q2 is a relatively small car, it still gives you a relatively high-up driving position that most SUV buyers seek. This means you're treated to a great view of the road ahead, aided by reasonably slim windscreen pillars.

The rearward view isn’t quite so good, because thick rear pillars obscure over-the-shoulder visibility. Rear parking sensors come as standard and help mitigate this problem, but you have to either pay extra or jump to range-topping Vorsprung trim if you want front parking sensors and a rear-view camera.

As we said at the start, all version come with powerful LED headlights, with adaptive Matrix versions (which can be left on mainbeam without dazzling other drivers) standard on Vorsprung trim and available as an option on S line and Black Edition models. 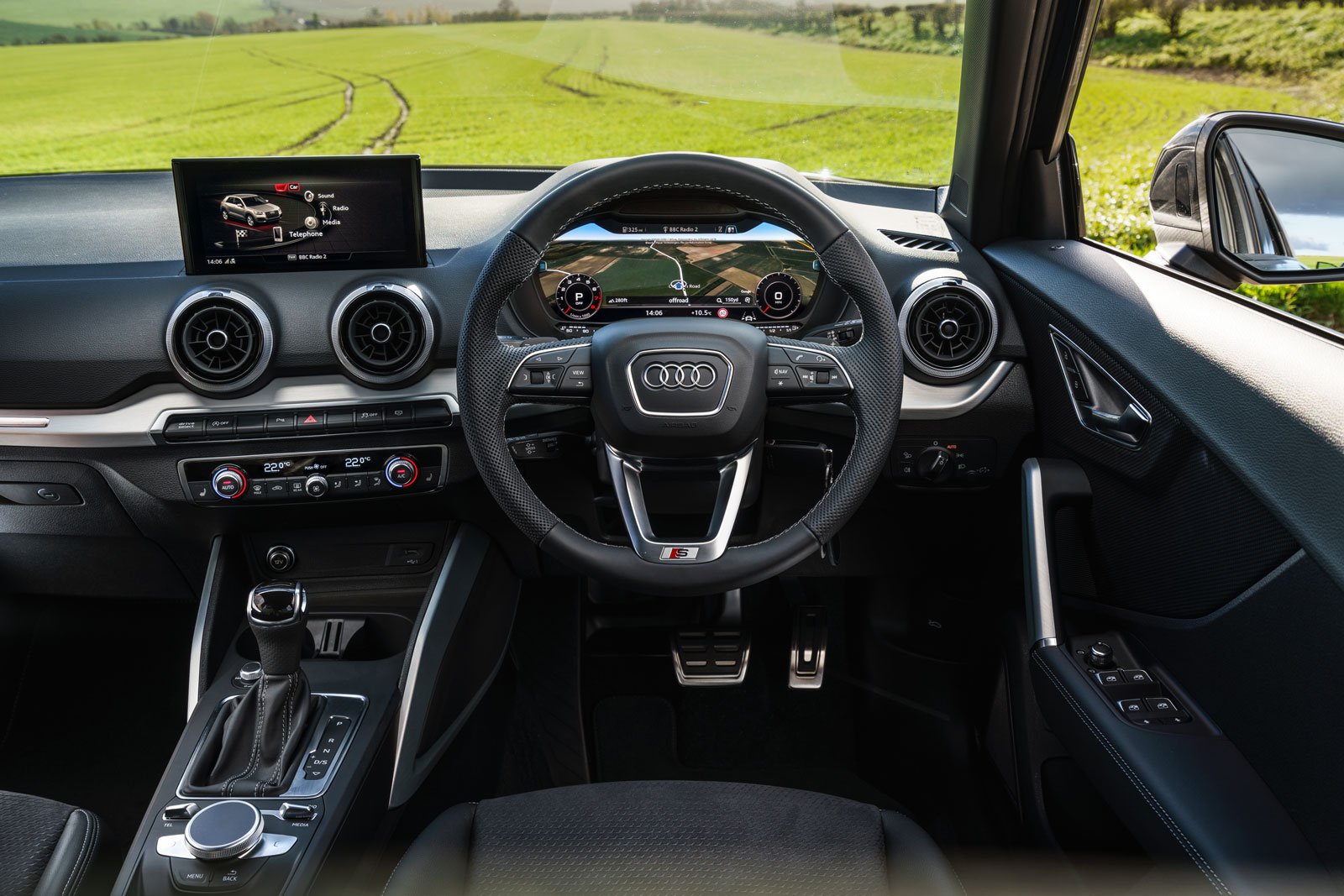 The Q2 has one of the best infotainment systems of any small SUV. With its simple rotary controller between the front seats, and shortcut buttons by the gearlever, it’s far less distracting to use on the move than the touchscreen systems you’ll find in virtually every other Audi model.

All Q2s come with essentials such as a DAB radio, Bluetooth and a USB socket for charging your phone. Thanks to standard Apple Carplay and Android Auto, you can also 'mirror' some of your phone's apps – including Google Maps and Waze – to the 8.3in display in the middle of the dashboard. Stepping up to at least Sport trim also nets a built-in sat nav with online map updates (free for five years), Google Earth navigation, live traffic information, online media streaming  and a Wi-Fi hotspot for up to eight mobile devices.

It is a shame, however, that you have to step up to range-topping Vorsprung trim if you want wireless phone charging and the fantastic 14-speaker Bang and Olufsen sound system.

Audi has a fine track record of creating beautifully built interiors and the Q2 is another cracking effort. It puts most other small SUVs, including the Volkswagen T-Roc and Peugeot 2008, to shame for quality and is roughly on a par with the Mini Countryman.

The upper surfaces of the dashboard feel soft to the touch, while all the switches and buttons operate with a precise click; the rotary climate control buttons, for example, tick satisfyingly when you rotate them. You can also personalise your Q2 with a number of interior trim combinations.

If you go for range-topping Vorsprung trim (or pay extra), the interior ambience is lifted further by illuminated inlays, which glow in a choice of 10 different colours.