If you like a lofty driving position, you'll love the Kia Sorento. The driver's seat also has plenty of side support, although the manually adjustable seat that you get with entry-level 2 trim doesn't have adjustable lumbar support. Also, its backrest is adjusted using a fiddly lever that has only a set number of positions. Move up to 3 trim and those issues are resolved – you get a fully electric seat with two-way lumbar adjustment. Range-topping 4 trim brings four-way lumbar adjustment.

The steering wheel lines up neatly with the seat and pedals and there’s a footrest with plenty of room for your left foot. All versions have a sharp 12.3in-digital display behind the steering wheel (rather than analogue instrument dials). Changing what the screen shows is easy using the buttons on the steering wheel, but it isn't as versatile as the ones in the Audi Q5, Seat Tarraco and Skoda Kodiaq.

Mercifully, Kia has avoided the temptation to bury all the heater and stereo controls within the centrally mounted touchscreen (as Peugeot has done with the 5008). There’s still a good old-fashioned knob to control the volume and you can tweak the interior temperature using conveniently positioned rocker switches. There are a few fiddly touch-sensitive buttons for controlling some of the other functions, though.

Perched high in the Sorento’s driving seat, you’re treated to a good view of the road ahead. The windscreen pillars don’t get in the way too much at roundabouts, and while the rear pillars are quite chunky, there are small side windows at the back of the car to help improve over-the-shoulder vision. Nevertheless, the Honda CR-V is still an easier car to see out of.

All versions of the Sorento get front and rear parking sensors and a rear-view camera, as well as full LED headlights for better visibility at night. Top-spec 4 models add a 360-degree bird's eye-view camera and a blind-spot camera. The latter displays a feed from rear-facing cameras located in the door mirrors on to the digital instrument screen. This shows what's next to you, although you could argue that encouraging you to stare down at the instruments instead of looking around you when manoeuvring isn't such a good idea. 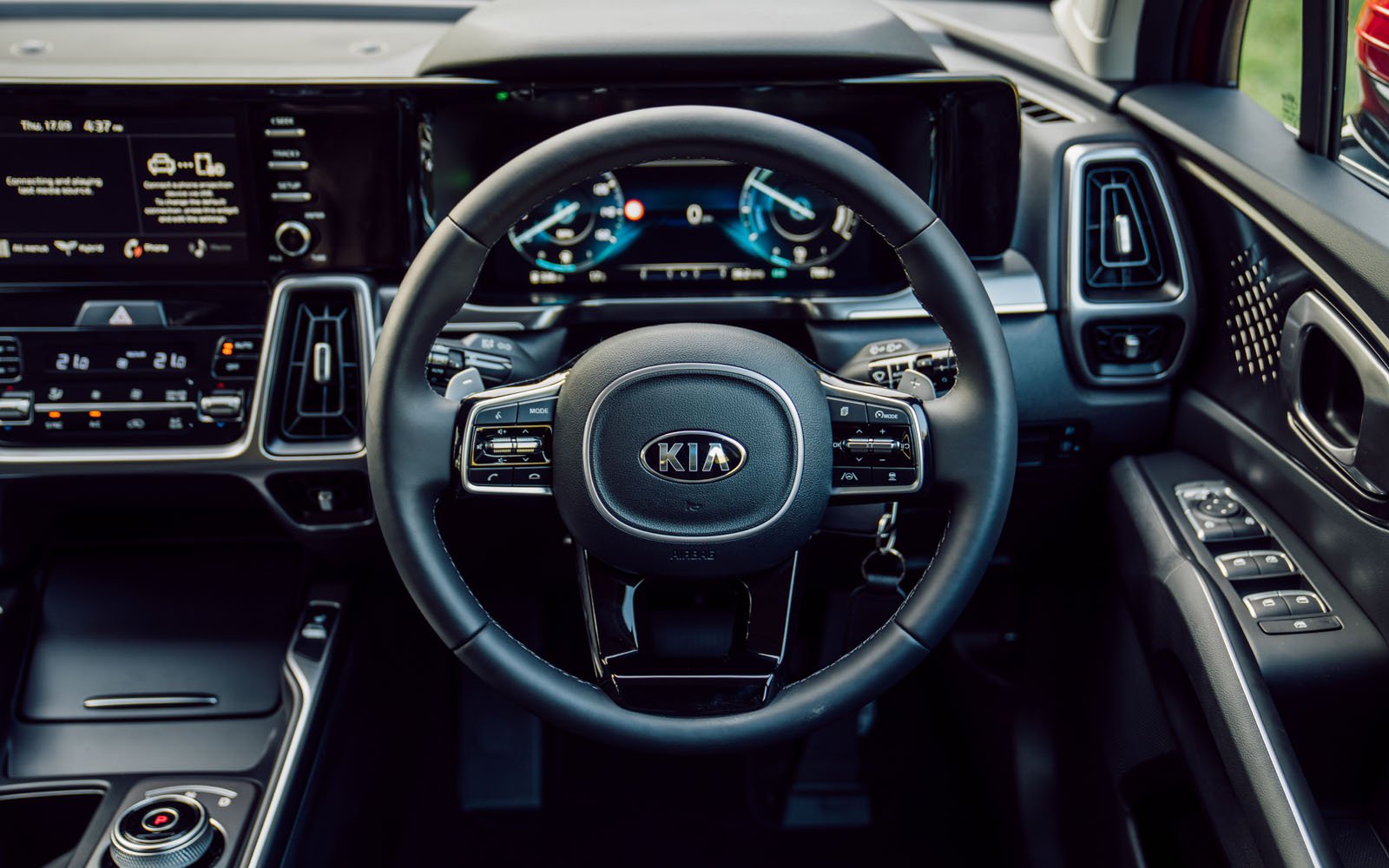 You’ll have to make do without a built-in sat-nav if you go for entry-level 2 trim, but that’s no hardship because Apple CarPlay/Android Auto smartphone mirroring is included. That allows you to run your navigation apps on your phone through the Sorento's 8.0in touchscreen, access your music easily and do all sorts of other handy things. The screen's graphics aren't the sharpest, but it responds quickly enough to prods and pokes, something the Peugeot 5008’s system doesn’t always do.

Move up to 3 trim and you'll get a bigger 10.3in screen with far sharper, more attractive graphics. It, too, is responsive, and you also get a built-in sat-nav function and a wireless charging pad. As with the lesser system, the menus are easy to fathom, making it one of the best touchscreen systems in the class. We still prefer the rotary iDrive controller in the BMW X3, though, because it's less distracting to use while driving.

To avoid squabbling over who’s charging what, all three rows of seats have USB ports (there are eight in total). Entry-level models get a six-speaker stereo while top-spec 4 trim gains a more powerful Bose system with 12 speakers.

For the most part, there’s little to complain about when it comes to interior quality. You’ll find lots of squidgy plastic, including on the insides of the rear doors – something that's by no means guaranteed in this class. There are also chrome and piano-black trimmings throughout, all the switches operate with precision and everything feels solidly screwed together.

Entry-level 2 models have cloth seats and rather plain-looking door trims. Both areas are trimmed in leather in higher-spec Sorentos, making the interior look and feel a fair bit plusher.

Indeed, quality is roughly on a par with the Hyundai Sant Fe, so the Sorento is far classier inside than the Honda CR-V. Mind you, the Peugeot 5008 interior feels slightly more upmarket and the BMW X3 has a much more premium air.