The 'self-charging' hybrid (HEV) Kia Sorento is nippy enough, with 0-60mph taking 8.7sec. True, there's a slight delay between you pressing the accelerator pedal and the car surging forwards, but it isn't pronounced enough to really annoy. The HEV can tow up to 1650kg, which is nothing to write home about (the Toyota Highlander can tow 2000kg).

The plug-in hybrid PHEV model has a bigger battery and its more powerful electric motor gives the Sorento slightly quicker acceleration (0-60mph takes 8.4sec). If you want more pace, there are faster versions of the Audi Q5 and the Skoda Kodiaq. Officially, the PHEV can run for up to 35 miles on electric power alone, although in the real world you'll be lucky to get more than 25 miles. The maximum towing weight of the PHEV is 1500kg.

The 2.2 CRDi diesel doesn’t have quite as much power as the hybrids, so outright acceleration is fractionally slower. Its gearbox is more responsive, though, and it has more low-rev muscle, which is just what you need for hauling around a full complement of passengers. It can also tow 2500kg – far more than either of the hybrids.

We'd recommend sticking with entry-level 2 trim on the HEV if ride comfort is a priority. That's because you'll get 17in alloys – the smallest available on the Sorento – which help soften crevices and pimples around town. The high-speed ride on motorways is impressive, too; overall, comfort is roughly on a par with the Hyundai Santa Fe.

If you jump up to 3 or 4 trim, the larger 19in wheels that come as standard cause the Sorento to fidget more over surface imperfections and thud harder over potholes, although the motorway ride is still very good. These higher-spec versions also get self-levelling rear suspension, which is handy if you’re planning to tow or carry heavy loads.

The PHEV is the least agreeable model in the range, but even that's not uncomfortable. It's just a bit more jarring over sharper imperfections – you get 19in alloys whichever trim you choose – and rocks you around a bit more at faster speed. 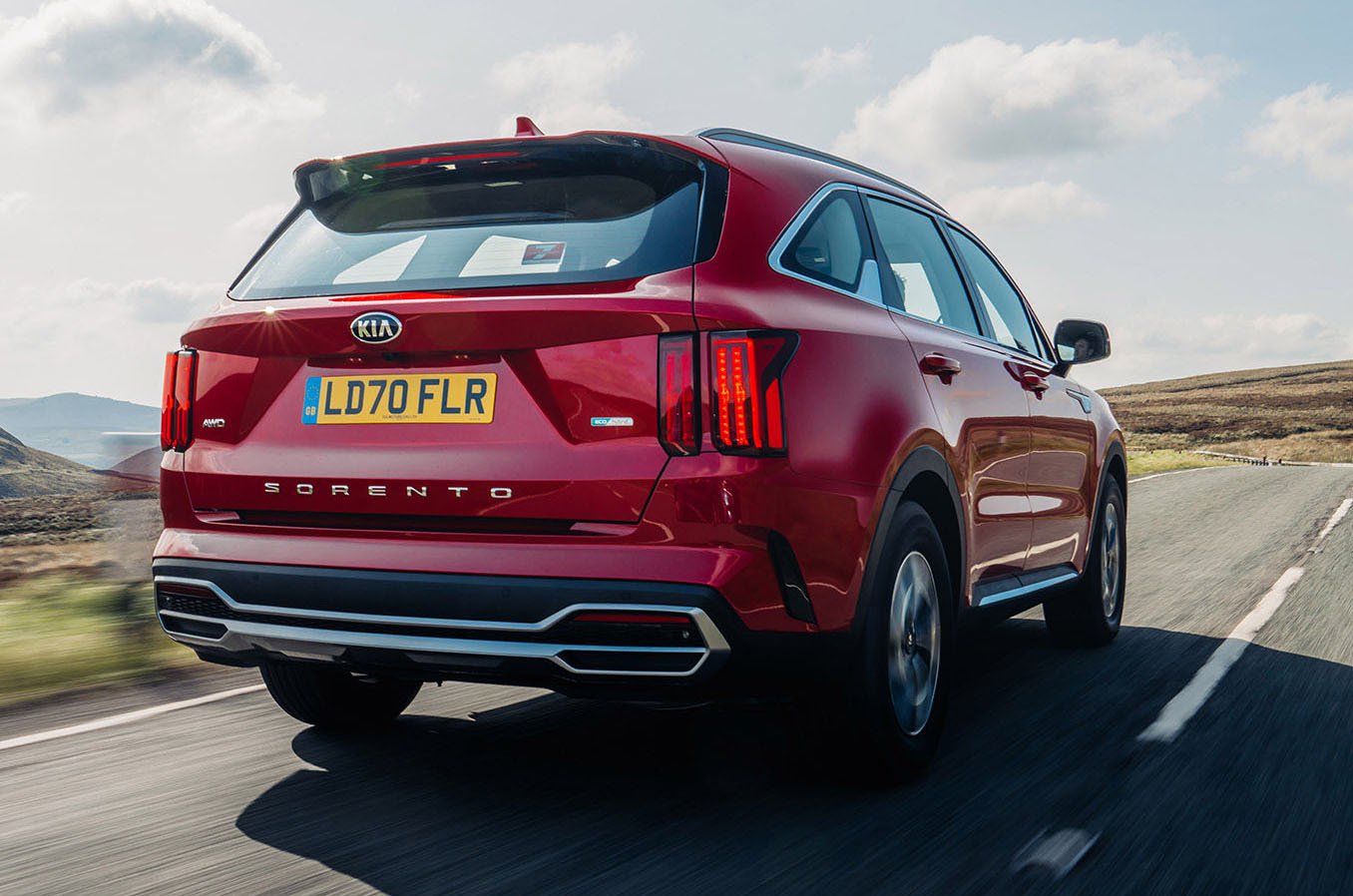 The Sorento’s reassuringly weighted steering allows you to place the car confidently on rural roads and also makes it easy to track straight and true on motorways. In town, you’ll find the wheel becomes light enough to twirl easily, too.

This is a tall and heavy car, so don't expect sports car handling, but the Sorento is far more agile than the Toyota Highlander. Indeed, it handles just as well as the closely related Hyundai Santa Fe.

Body lean is more pronounced in the heavier PHEV model (blame its weighty battery pack), but it's still less roly-poly than plug-in hybrid versions of the Citroen C5 Aircross and Land Rover Discovery Sport. As we mentioned above, the higher-spec 3 and 4 trims come with self-levelling rear suspension that should improve the Sorento's stability and handling when it's being used for towing.

If you're driving either the HEV or the PHEV in pure electric mode then, rather predictably, you won't hear any engine noise. Even when the petrol engine is being used, it frequently shuts off as you slow down and remains fairly quiet when you’re accelerating gently. Hard acceleration reveals a coarser edge to its timbre, although it's still quieter have high revs than the engine in the Toyota Highlander.

Unlike some hybrid vehicles, the Sorento switches smoothly from electric to petrol power. The automatic gear changes are smooth and the brakes are relatively smooth – even in the PHEV, which has more aggressive regenerative braking. There's some suspension noise over bumps in the road, and a bit more tyre and wind noise at 70mph compared with the best cars in the class, but it never becomes tiring.

The Sorento's diesel engine is rather grumbly and sends a few vibrations up through the steering wheel.