Thanks to a wide range of adjustment for the seat and steering wheel, tall and short drivers alike will be able to get comfortable; there's even a tilt adjustment for the front seat bases so occupants' thighs aren't floating above the seat cushion. However, you only get adjustable lumbar support on the top two trim levels, and it’ll disappoint anyone who wants an SUV-style raised driving position – it’s barely any loftier than the Mazda 3 hatchback. You’ll sit much higher in a Skoda Karoq.

Still, in an age of ever-larger and more complicated touchscreens taking over for even basic controls, the CX-30 is a breath of fresh air. It gives you good old-fashioned buttons and knobs for the heating and stereo, allowing you to find all the controls by feel alone once you’ve familiarised yourself with them. This reduces the need to take your eyes off the road.

Part-digital dials are standard on all models. These can’t show the breadth of information  of the fully digital dashboards available from Seat, Skoda and Volkswagen, but are crisp and easy to read. Handier still is the inclusion of a clear head-up display that places speed, sat-nav instructions and other data in your line of sight.

The front pillars could be a little thinner to give you a clearer view when pulling out of junctions, but the CX-30’s rear pillars are by no means the thickest in the family SUV class. However, its small rear windows and relatively small rear screen limit your view rearwards and over your shoulder; the Skoda Karoq’s large glass area makes reversing easier.

All models get rear parking sensors, with front sensors and a reversing camera standard on all but the entry-level trim. There’s also a bird-eye-view camera that provides an overview of your surroundings when manoeuvring; it works very well but is only available on the top-spec trim.

The Mazda CX-30’s infotainment system eschews the touchscreen interface that most of its rivals employ – a design decision made on the grounds that such systems can be distracting to use while driving. We tend to agree with that, so it's nice to see that all CX-30s come with a centrally mounted 8.8in infotainment display operated by an intuitive rotary controller, the latter being mounted between the front seats along with shortcut buttons.

Compared with the dashboard-dominating touchscreens of the Skoda Karoq, Seat Ateca and Volkswagen Tiguan, the CX-30's rotary controller makes it easier to scroll through lists and menus on the move, and Mazda's software is just as responsive and easy to navigate.

The infotainment system also comes with an impressive array of features. All models get DAB radio, Bluetooth, sat-nav and smartphone mirroring via Apple CarPlay and Android Auto. The standard eight-speaker sound system is impressive enough, but a more powerful 12-speaker Bose setup is available in higher trims. We just wish there were a few more USB ports up front and at least one (ideally two) for rear seat passengers.

We’re not going to beat around the bush: at the expected entry-level price of the CX-30, no other SUV comes close to its classy solidity. Indeed, you have to jump up to a BMW X1 or Volvo XC40 to get a similar level of plushness.

The dashboard is slathered in squishy, expensive looking plastics and there’s lashings of leatherette in a choice of two colours as well. Add some classy chrome trim into the mix and it’s a fine place to be. Yes, there are hard plastics lower down, but the standards are still very high when you consider the price.

Play with the switches, stalks and knobs and you’ll find they all click, turn and move with an expensive feel as well. Only the top of the infotainment controller looks a little cheap, but even then it feels great to use. 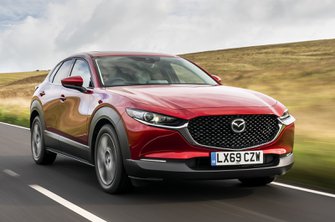 One of the very best small SUVs. Should be cheaper, though