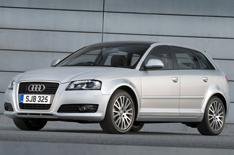 Audi has launched a 'stop-start' version of the 2.0-litre TDI A3 with improved fuel economy and lowered CO2 emissions.

Audi has also introduced a part-time alternator, which recharges the battery under braking, recuperating energy that would otherwise be lost.

The new efficiency measures mean that the A3 2.0-litre TDI is almost as green as the less powerful 1.6 TDI (67.3mpg and 109g/km) and better than the similarly powerful BMW 118d, which manages 62.8mpg and 119g/km with a manual gearbox.