Coupes and convertibles, part one 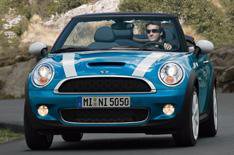 Many readers ask us why the next-generation Mini Cabriolet hasnt gone on sale, when the hatch appeared two years ago.

We can only assume Mini is making sure that every aspect of the cars development is just-so, but it wont be too long now before it hits the showrooms.

The roof will continue to be made of lightweight cloth rather than metal.

The hood now has a bigger, separately-opening front section that allows it to fold more neatly without increasings its height when stashed away.

Youll also be able to tell exactly how often youve driven along with the wind in your hair, thanks to a gauge that calculates the percentage of time youve had the roof up and down.

Engines will include the new 1.6-litre petrol that the hatchback uses, with the hottest Cooper S model managing 0-60mph in under 8.0sec and going on to a top speed on the exciting side of 130mph. Thats only slightly slower than the hatch, despite the strengthening required to ensure the car handles well without a fixed roof.

The Minis diesel engine is also to be offered in the open-top model for the first time. The 110bhp 1.6-litre unit should be able to achieve 65mpg.

Mini also has high hopes that the Cabriolet will achieve the same high safety ratings achieved by the hatch and Clubman, although how the revised, more stringent Euro NCAP tests due next year will affect this remains to be seen.

It has taken Lexus seven years to launch a second convertible, but its drop-top IS is finally here and ready to battle it out with the likes of the BMW 3 Series Convertible.

Like its SC430 sibling, and the BMW, the IS 250C uses a light aluminium, three-part roof that folds into the boot in under 20 seconds.

Theres a 205bhp, 2.5-litre V6 petrol engine under the bonnet and a six-speed automatic transmission, which means the car should reach 60mph in fewer than nine seconds.

Lexus says it has strengthened the chassis to make the convertible stiff and keep the key issues of noise, vibration and harshness under control as much as possible.

Golfers may also like to know the boot has been extended by 50mm over the saloons, so theres still plenty of space available more than enough for a decent-sized golf bag.

This is quite a departure for BMW, because the old Z3 roadster and the current Z4 both have cloth tops. The metal roof that the latest incarnation of the Z4 has been photographed wearing in testing will improve security and should make the car look more refined when its buttoned up against the elements.

Purists may worry that a metal roof will add weight where its not wanted and may take up more boot space, but BMWs 3 Series Convertible proves that the manufacturer knows a thing or two about getting the folding tin-top trick right.

Engines are all likely to come from the 3 Series range, and should include the 415bhp 4.0-litre V8 from the ferocious M3. Nothings confirmed yet, but it also looks possible that a diesel will be offered for the first time. Its likely to be the 204bhp 2.0 twin-turbo from the 123d, which should all the Z4 to outpace the rival 168bhp 2.0 Audi TT TDI.

Audi is playing its cards very close to its chest with this one, but we know the A4 Cabriolet is soon to be replaced by an A5 version.

Theres no sign of the car yet, but the smart money says the A5 Cabriolet will be unveiled at the Detroit Motor Show in January.

The car is widely expected to use a cloth top rather than the folding metal roof preferred by BMW for its 3 Series Convertible.

That will help to keep the weight of the car down and allow the A5 Cabriolet to make best use of the increasingly efficient engines Audi is producing. Choices should include the new 208bhp 2.0-litre turbocharged petrol and the highly rated 3.0 TDI diesel from the A5 coupe.

Bear in mind: cloth roofs dont necessarily compromise refinement Maybach and Rolls-Royce fit them, after all but they are, of course, more vulnerable to attack.