More for you |
How to save money on your car insuranceShould I buy winter tyres?Audi A3 Sportback long-term test reviewWhat’s the best practical convertible car for me? A guide to short-term car insurance
Home
News
Geneva motor show 2012: New Audi A3
news 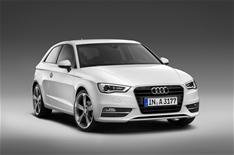 Images of the new Audi A3 appear to have been leaked on the internet two weeks ahead of it planned debut at the Geneva motor show.

The sites also posted cabin images, confirming rumours that the next A3 makes a bigger step inside than out. The new fascia appears smaller than before, freeing up cabin space, and the sat-nav screen looks as though it emerges from a slot in the top of the dashboard. After it is deployed, the screen will float above the fascia in a manner that's similar to systems in more expensive Audis such as the A7.

Other features include a further development of the A1-esque circular air vents, and cupholders sited in front of the gearlever, almost underneath the dashboard. Theres also one notable absentee a handbrake lever suggesting that the A3 is switching to a button-operated electric brake.

Audi has not issued any technical details about the vehicle and its unlikely to do so ahead of the A3's official debut on the eve of the Geneva show on March 5.

The A3 will go head-to-head with the latest BMW 1 Series and new Mercedes A-Class. Another key rival will be the new Volvo V40, images of which have also been leaked ahead of its Geneva debut.