New Audi A3 to go electric and hybrid 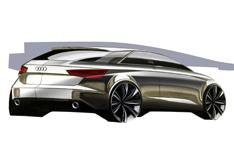 Next years all-new Audi A3 will have up to six power sources and four bodystyles.

Joining new versions of the three-door hatch, five-door sportback and two-door cabrio will be a new four-door saloon that's very similar to the A3 concept car shown at this year's Geneva motor show.

According to Audi's design boss, Stefan Sielaff, all A3 versions will have slightly different design details: Three-door cars will be more compact and sharper in design, while the four-door will have different dimensions and detailing around the car itll be a sporty, peppy design with a sexy back end!

More angular look
As our design sketches show, the new A3s have a more angular look, featuring what Sielaff describes as a strong tornado line running along the shoulders of the cars from front to back.

To improve space in the four-door A3, it will be 130mm longer than the three-door hatch, and wider, too.

Premium interior
Inside, Audi is promising a new premium standard in the A3, with a slim monitor sitting on top of the dashboard.
The latest version of Audis MMI controller system will debut in the A3, featuring a touch wheel a rotary controller that also acts as a touch-pad for drivers to write numbers and letters on and a reduced number of buttons. The touch-pad system can already be found on A6, A7 and A8 models. Internet connection with Google maps and other features will also be available in the A3.

The new A3 will have advanced TDI diesel and TFSI petrol engines, all featuring engine stop-start and brake energy regeneration, which will boost efficiency by up to 20%.

Hybrid and electric versions coming
The A3 has also been engineered with future engine technology in mind. Audis engineering chief, Michael Dick, has confirmed that therell be a full electric version similar to the A3 e-tron concept car, while hybrid and plug-in hybrid versions will also be available. Michael Dick said that Audi was even looking at a version of the A3 to be powered by natural gas.

The new A3 will make its debut at Septembers Frankfurt motor show and go on sale, initially in three-door form, in the UK in the early part of 2012.