One of the benefits of designing the Land Rover Defender with boxy proportions is that it gives everyone on board lots of space in every direction. So, just like in the equally perpendicular Mercedes G-Class, it doesn’t matter if you’re broad-shouldered, long-legged or tall in the body, you’ll have all the room you need in the front. If you've ever sat in the front of the cramped old Defender, let's just say the current one will be a refreshing change.

For a reasonable outlay, you can even replace the standard centre console between the driver and passenger seat with an occasional middle 'jump' seat. It means you can carry up to three people in the front, but the seat’s high and narrow base means that an adult will only want to sit on it for the briefest of journeys. Just remember, you can’t have the jump seat and the third row of seats at the back. 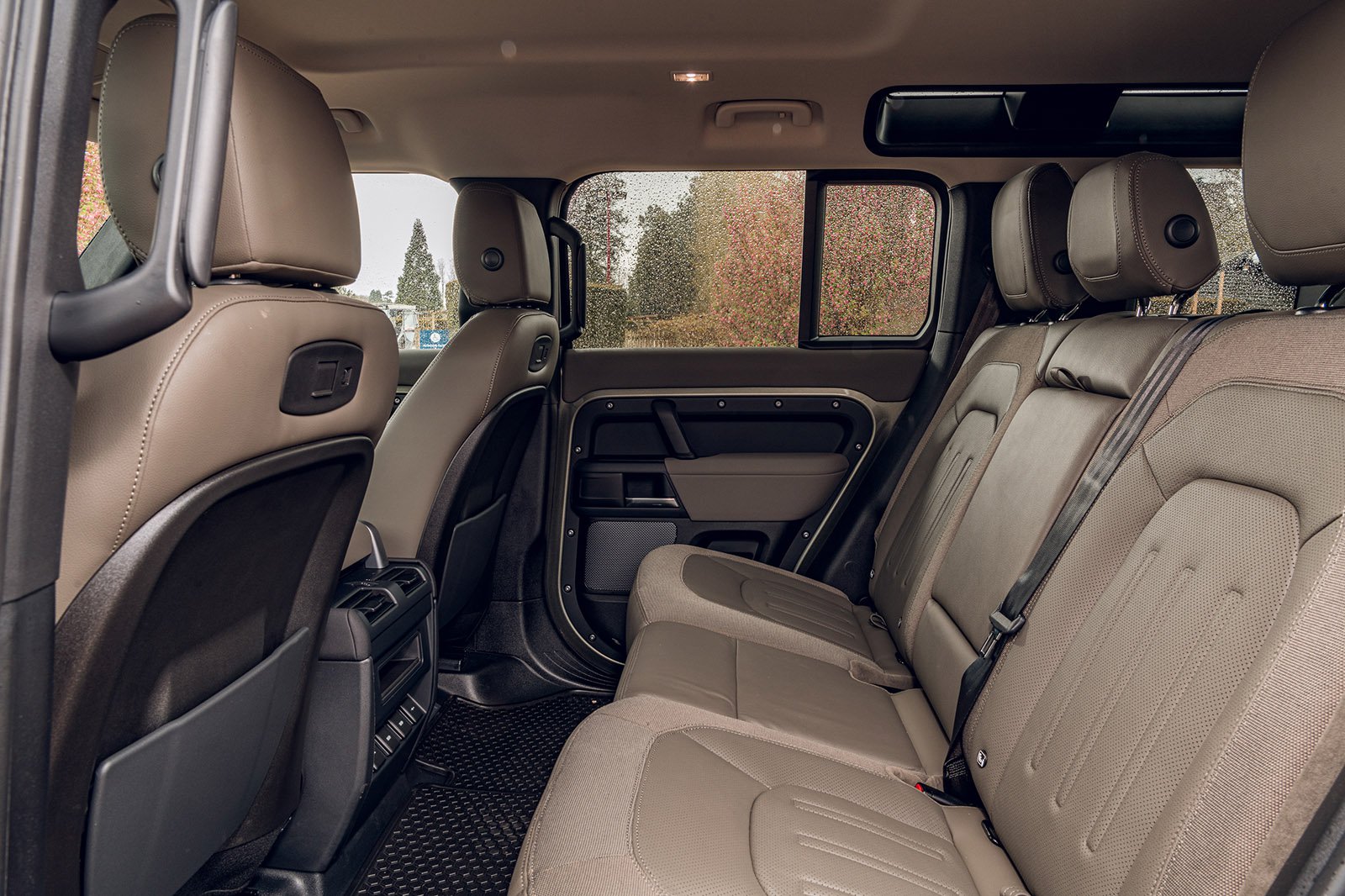 Those sitting in the second row of seats in the long-wheelbase 110 model will find masses of head room, and the sheer width of the Defender makes sitting three abreast pretty comfortable, too. Leg room is also impressive – there’s lots of space to stretch out – although the floor is a little higher than it is in the Audi Q7 and BMW X5, making the seats slightly less comfortable for adults.

The 90 also has lots of head room, and while leg room isn’t as impressive as it is in the 110, a tall adult will still have space. More of an issue is the raised floor, which means your knees are bent at an awkward angle with little under-thigh support. Oh yes, and the lack of rear doors. Their absence makes gaining entry trickier than it is in the 110. Children won't find that a problem but adults will, and it'll make your life harder if you're fitting a child seat.

If you occasionally need to carry more than six people, you can specify a ‘five plus two’ variant of the 110, with two extra seats that can be pulled up from the boot floor. Thanks to the Defender's high roofline, head room is still excellent, although there's more leg room in the third row of the Land Rover Discovery and BMW X7. Or, if you don't want to spend that kind of money, the Kia Sorento is another option if you're after a more capable seven-seater.

If you order your Defender in the entry-level trim, you'll get 40/20/40 split-folding second-row seats, but they won't slide or recline. If you pay extra to have seven seats, the second row gains the sliding and reclining function, but annoyingly the seatback switches to a less flexible 60/40 split.

As we've already mentioned, accessing the rear seats in the Defender 90 is awkward, particularly with the electric seats you get from SE trim. You have to tip the seatback manually, then push a secondary button to slide the whole seat forwards. You then need to push and hold another button to move the seat backwards – and sadly it doesn't remember its original position.

The three-door Defender 90 has less boot space than many family hatchbacks. It's really high, which is fine if you're happy to stack items on top of each other, but there's not much room between the tailgate and the back seats. The 110 has a more impressive boot, although we still managed to fit only seven carry-on suitcases below its load cover. Many rivals, including the Q7 and Volvo XC90, can swallow quite a few more. Mind you, the Defender does show up the Jeep Wrangler for luggage capacity.

110 versions with seven seats lose some underfloor storage and, predictably, have much less boot space when the rearmost seats are in use. If you need to carry longer, bulkier objects, you can fold down all the rear seats and turn your Defender 110 into something closely resembling a small van; the resulting extended load area isn’t completely flat, though. But it’s flatter than the 90's, which has a massive step when the rear seats are folded down.